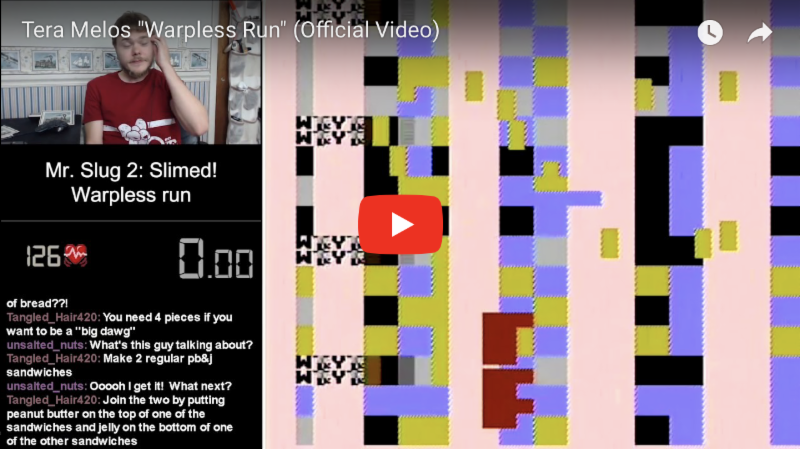 Tera Melos premiere the official video for “Warpless Run” from their recently released third album Trash Generator today via NPR. The clip features world record holding Super Mario Bros “speedrunning” player Darbian (more about that in a moment). The song itself is an album standout featuring guest vocals on the coda by Rob Crow of Pinback. Watch & share the video HERE.

Tera Melos is currently in the midst of an extensive North American headlining tour with Speedy Ortiz supporting. Please see current dates below.
About the video and “speedrunning”, vocalist/guitarist Nick Reinhart explains:

“Speedrunning is when a human beats a video game as fast as possible. It’s a FASCINATING practice that involves tons of bizarre in-game science to make these runs as fast as humanly possible. Darbian is basically the Michael Jordan of Super Mario Bros (SMB1). His speedruns are legendary. Darbian is the current Super Mario Bros Any% world record holder, and has been many times in the past (“Any%” is a record category that allows the use of every trick in the book in order to complete the game).

“For a stretch of time, Darbian was working on the SMB1 ‘warpless run’ world record. This is where you complete the game without using any of the warps (located in world 1-4 and 4-2). During one of these runs Darbian mentioned how there are things you don’t get to see throughout the Any% runs. One thing in particular is world 3 and world 6. Those two worlds are set at nighttime and they have a very different look from the rest of the worlds. He talked about how they’re the coolest looking levels that we never see because we’re all too busy trying to beat the game as fast as possible. That really resonated with me, so we wrote a song about it! (and we got Rob Crow to be a part of it!)

“We had this wacky idea to try and recreate one of Darbian’s speedruns with a made-up Tera Melos-style video game. I gave our longtime visual collaborator, Behn Fannin, a call. Then I wondered, ‘it would be pretty cool if we could actually get Darbian in the video…” I figured there’s no harm in asking, so i sent him a message and he was into it!! Next thing you know, Behn sends us this video game he had made from scratch plus a duplication of Darbian’s live Twitch stream layout. It blew our minds. And finally, we got to have the legendary Darbian speedrun our own video game, in which the soundtrack is one of the weirdest songs we’ve ever written.”

Trash Generator, the trio’s third full length, is an astonishing blast of confidence and rejuvenation. It sounds as if the 4-year downtime since their last album has recharged the band with an entirely new sense of purpose. The performances are brilliant and sharp, the songs concise yet intricately detailed, and the album production deftly captures the band’s strength as a live unit. Their dalliances with mellower psychedelic phrases on their previous two albums, X’ed Out (2013) and Patagonian Rats (2010) are significantly trimmed and instead utilized as colorations within a swirling maelstrom of righteous aggro punk-jazz abandon. As such, it sounds like Tera Melos has fully metabolized their pop tendencies and found a way they can coexist with the band’s iconoclast origins. Tera Melos — guitarist/vocalist Nick Reinhart, bassist Nathan Latona and drummer John Clardy — have learned to stop worrying and just be Tera Melos.