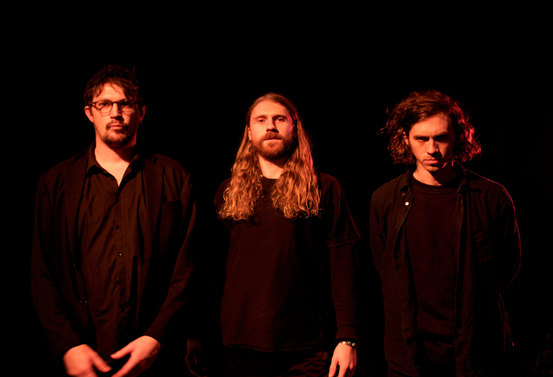 GHOLD LAUNCH THEIR NEW ALBUM STOIC AT CRYPT OF THE WIZARD,
AND AS MAIN SUPPORT FOR BIG BUSINESS; ALBUM STREAMING IN ITS ENTIRETY

There’s plenty of opportunities to experience GHOLD’s latest album Stoic this week. The trio are to launch their new album at Crypt Of The Wizard on the release date, November 3rd. The label/shop are marking the album and their label release with a party, open to all, which shall begin at 7pm until 9pm, Stoicshall be played in full during the evening. Ghold will also mark the release of Stoic with a live performance as main support for Big Business in London on 8th November, and you’re invited to experience an early stream of the album, take a listen below…

LISTEN TO STOIC BY GHOLD IN ITS ENTIRETY
PRE-ORDER – https://store.cryptofthewizard.com/Ghold-Stoic-*PRE-ORDER-COLLECT-IN-SHOP*-p95109185

TRACK LIST:
Nothing Dreamt
Blue Robe
Ruptured Earth (Head In Sand)
Faeder Ure
SKHUL V
SKHUL VI
LIVE SHOWS:
Nov 3rd Crypt Of The Wizard, album launch party
Nov 8th Underworld, London w/ Big Business
Stoic is to be released on November 3rd by the newly formed Crypt of the Wizard record label, and distributed worldwide by Plastichead.
Stoic is available as an LP in all good record shops (including the Crypt’s London shop and website), and as digital download.
“…thunderous riffology is balanced with extended passages of nuanced atmosphere which are delicate, even beautiful, as elongated drones drift into ambience…Ghold haven’t lost sight of their thrashy roots, but have instead honed their sound into a glorious hybrid that’s uniquely theirs.” – AURAL AGGRAVATION

“There’s not enough bands out there like Ghold, bands who break boundaries and spread their wings in order to craft something that is visionary and unique…..There is a weirdly transcendent force behind these crashing chords and overwhelming song structures and it can’t help but to be addictive…This is an album that crunches forward in a way that almost feels unhuman…. They have that simply colossal guitar tone suited for big rooms, mind melting theatres and bone melting shows. There is an intensity to Ghold that can be tricky to wrap your head around, especially given that the album so gleefully gives time to negative space. And yet it is that selfsame negative space which helps make it so addictive”.

– SCREAMING GUITARS
“Ghold is a band who stun from top to bottom, freely adding experimental bits, progressive melodies and powerful vocals in a variety of styles. Quite the record to wrap your head around, Ghold represents a path that is unwavering and bold. Their artistic vision clear and their sound turning into a perfectly honed assault, it is hard to turn away from what has been wrought here.”  – TWO GUYS METAL REVIEWS
WEBSITE