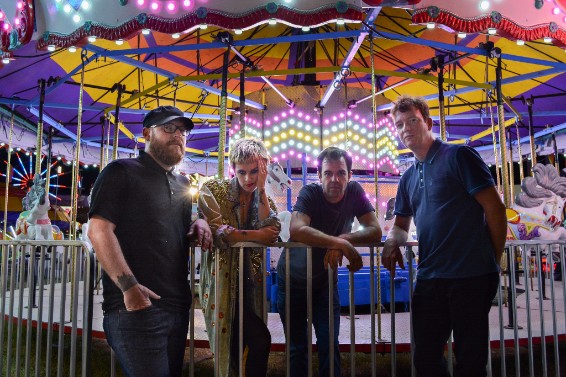 The Color Blue Due Out August 18th via Shifting Sounds

SPIN are sharing album opener “Something About Milwaukee,” the record’s third single, calling it “sparkling, fully formed shoegaze, the kind that makes you want to frolic in a verdant field for hours on end—a cross between bands like Slowdive and, say, Real Estate.”

“‘Milwaukee’ is about being stuck. The lyrics function in an abstract way for me but it is essentially about needing a new perspective or a big push. It’s our newest tune and we wanted it to be really shimmery and pretty. I’m enjoying working on songs where I sing a little softer. It’s easy to get on stage and shout your face off because you’re excited but songs like this one challenge me to find another part of myself to sing from.”

“Informed, glowingly, by Jess Ledbetter’s staunch lead voice, The Color Blue is a resolute and formidable five-minutes of textural rock and roll; a glorious splash of colour and noise that seemingly swallows up the space around itself until little else matters at all, the final minute or so offering a weighty and breathless unraveling that’ll have you grasping for more.” – GoldFlakePaint

“an alluring swirl of guitars and sky-ward driven riffs. Frontwoman Jess Ledbetter’s voice dances between the distortion with resolute grace” – Consequence of Sound

Lovely and loud, Honeyrude is a melding of time and influences. Founding member Ian Lund (guitar) first met Billy Kunath (bass) asleep in a van in his driveway in Chicago. Kunath was playing in a punk band that Lund was recording at the time. The two became friends and were in and out of contact over the years yet both landed in Austin and became bandmates in 2013. A year and 3 singers later, Jess Ledbetter (vocals, guitar) joined the band upon moving from Brooklyn, NY back to Texas. The project came recommended to her by an ex-boyfriend and bandmate. Honeyrude came to their present line-up in March of 2016 when Paul Goetz agreed to sit in on drums for a tribute show celebrating The Cure. They met each other by learning “From The Edge of The Deep Green Sea” and quickly asked Goetz to join. The four began recording demos and in the fall of 2016 they self-recorded The Color Blue to be released on vinyl August 2017 via Shifting Sounds.