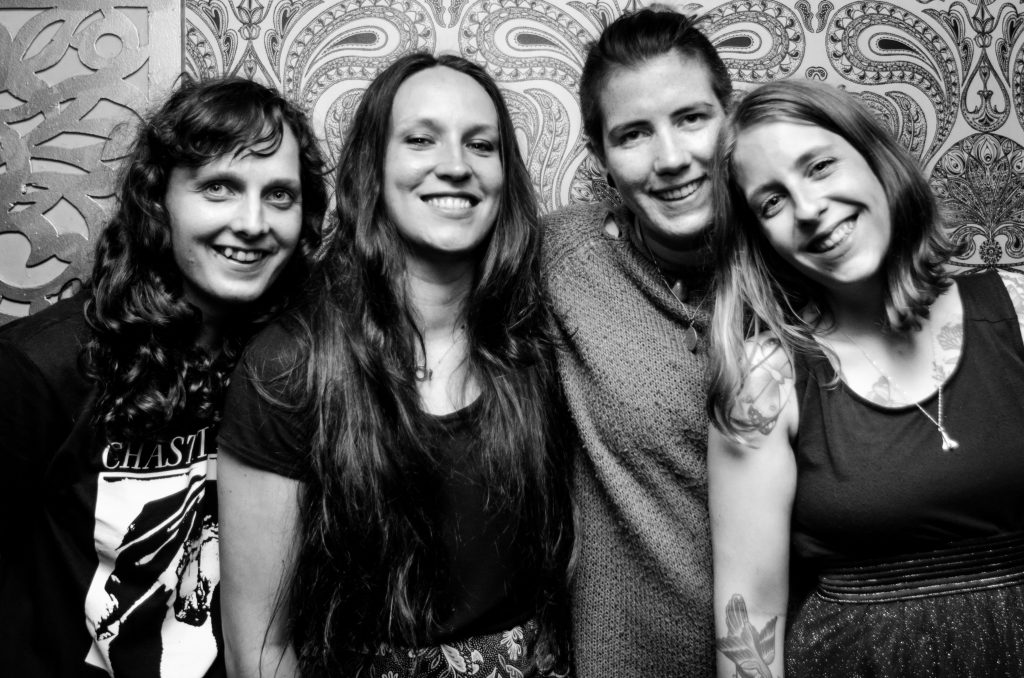 Leeds’ Esper Scout have shared the video to brand new single ‘Compass’. The video, which was directed by Jennifer Morris, sees the quartet playing while being projected onto themselves. The simple and effective visual compliments the track which is full of powerful guitar riffs and dreamy vocals and stays true to the band’s vibrant nature. ‘Compass’ is out now and available on digital platforms via Bomb The Twist.

Sarah Statham (vocals/guitars) on ‘Compass’: “A song about tenacity, compassion and the strength of the human spirit, ‘Compass’ is inspired by a person’s sense of home and security. The lengths to which love and care will reach. Two virtues drawn out in recent times by strangers being driven away from familiar and comfortable surroundings as a consequence of forces outside their direct control. Displacement due to war, detachment or disunion by borders. The reality for many of navigating survival in the face of opposing interests. It could happen to anyone and we as a band feel it’s important to embrace understanding, reach out and welcome in the experiences and perspectives of others.”

You can catch them live at the below dates:

Esper Scout are an alternative/experimental rock band based in Leeds, UK. Since forming in 2011, they have nurtured a vibrant back catalogue of melodically captivating songs, and gained a reputation for their passion, conviction, and resolute attitude.

Esper Scout have fans throughout the UK, picking up new followers during a UK tour in support of The Cribs and through radio play from Steve Lamacq on BBC 6Music. The band draws on international politics and grassroots concerns for lyrical content, and their audience is growing beyond the UK following a short US tour in 2015.

In late 2016, the band went into the studio with Ian Davenport (Band of Skulls, Dinosaur Pile Up, Supergrass). The pair of resulting recordings (‘Compass’ and the as yet untitled second track) are being released along with a live session video from the studio, and the band’s debut album is expected in 2018. Previous releases include a digital AA-side single via the legendary US label, Kill Rock Stars and a 7” single on the Come Play With Me imprint.

As well as being one of Leeds’ most talked-about bands, Esper Scout are respected as a group of mindful and socially aware individuals active in Leeds’ thriving creative community. They are active members of the Leeds DIY art space ‘CHUNK’ as part of a co-op alongside a dozen other bands, which often collaborates with other venues and collectives in the city.

FLEET FOXES RELEASE NEW SONG ‘IF YOU NEED TO, KEEP TIME ON ME’ – NEW ALBUM CRACK-UP OUT JUNE 16, 2017 VIA NONESUCH RECORDS