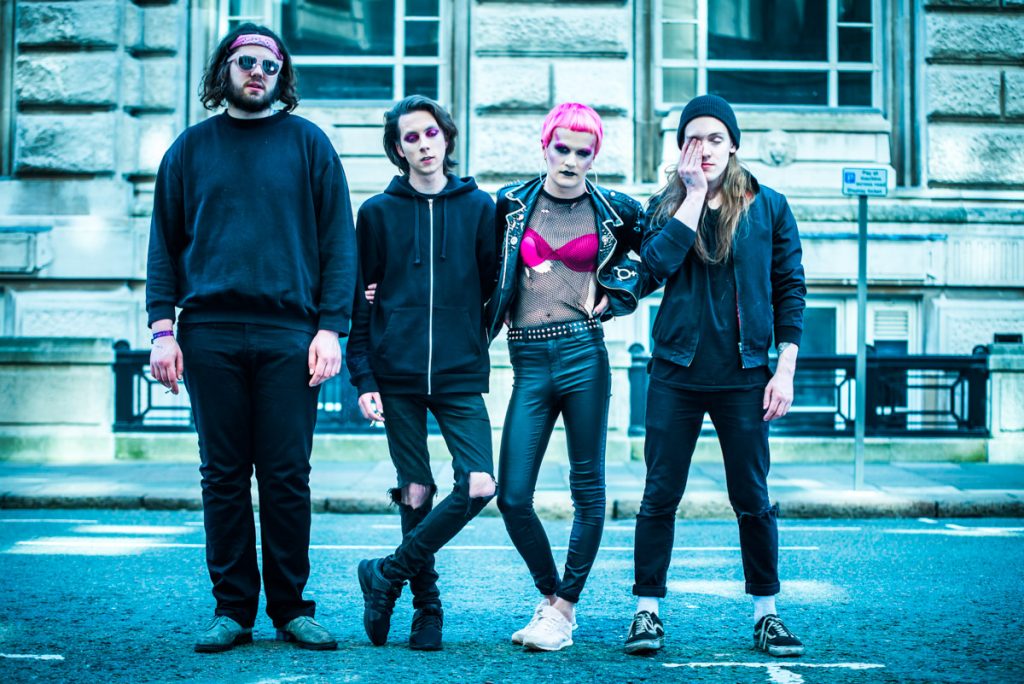 Queen Zee & The Sasstones have announced the release of their debut single, through brand new label Nice Swan Records (Dead Pretties, The Lightning Year), to be released on limited 7” vinyl and digital on 5th May 2017.

“We’ve got no time for music, art or politics that are bland,” say Liverpool newcomers Queen Zee & The Sasstones “Bands that sing songs about nothing, that aren’t musically adventurous; art that is just a heap of clay with no purpose except for Facebook likes and Instagram followers.”

Fronted by the direct and articulate Queen Zee (vocals/guitar) the band is completed by fellow songwriter and multi-instrumentalist Em, aka Em Dee (guitar), Frank Flag (bass) and Pink Eyes (drums).

Drawing heavily on a variety of musical influences from the 70’s garage rock explosion to the world of 80’s pop, for Queen Zee, blurring the lines between the establishment and the DIY scene is something the band are clearly already au fait with.

What the notion of home conjures up for the band is a feeling of “pure unsaturated boredom” with “more than enough reasons to be fed up”. Often caught between the cracks and out on a limb, they’re too much of a pop band for the hardcore scene and too punk for the pop scene. Ultimately, they say, they’re more influenced by the city’s working class politics, LGBT+ community and ethnic diversity than by its music scene.

Much of their material stems from their experiences as young, working class, Northern, (queer) punks, and although the music they make is inherently political, it’s not something they lose sleep over cementing into their sound.

“You don’t have to have a message,” they say “Sometimes bands should stick to making great music, and sometimes you have to remember you’re in a band and not writing an essay, but I think if you don’t have something to say in the current climate then you’ve been living under a rock. You’re forced into being political when it feels like everyone’s out for your head. We don’t really have a manifesto, it’s kind of anarchic in that way. We don’t have a single cause or message. We’re a band and we’re here to make the best music we can.”

Straddling the underground art and music scenes in their hometown, searching for inspiration amongst a community they feel disconnected from creatively, they’re a band who are constantly looking for a way to push themselves out of their comfort zone.

See Queen Zee & The Sasstones live on the following dates:

Introducing Casey Bolles; On Tour with My Heart, My Anchor In August‏