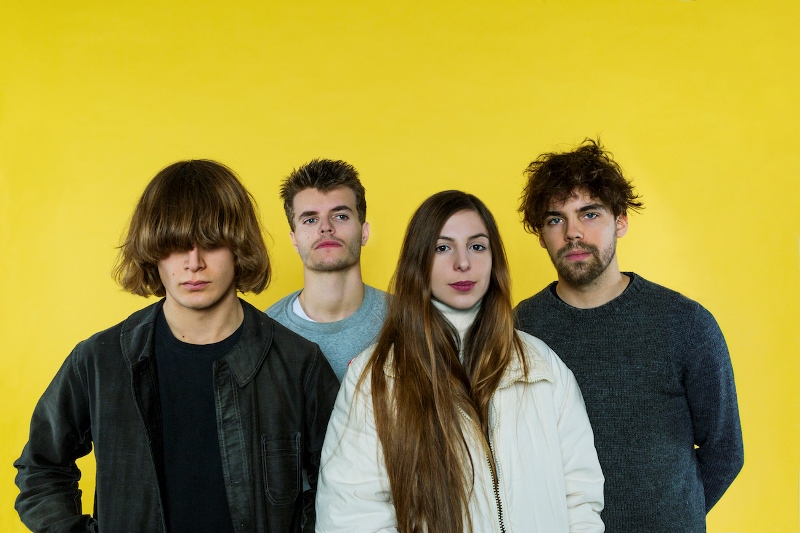 “an imposing introduction, uniting elements of shoegaze with stuttering electronics and Krautrock rhythms”:
Clash – Track Of The Day

“the first release from the band shows something really special has arrived from France”:
Far Out Magazine – Track Of The Day

“a wonderful blend of new and old”:
All Things Go

Dead Sea, a French four-piece who write, record and rehearse in the small apartment that they share above a café in Paris, have today shared a video for their debut single, ‘8.50’. The video was envisioned by Dead Sea, directed by Jean-Charles Charavin and produced by Incendie / Atelier K-Plan.

The director said the following about the video: “For this video, we worked with Dead Sea to create a universe with a taste of mysterious futurism and beauty. Caro had already made some pretty serious research and brought us the inspiration about the atmosphere, the stylism, the strong architectural statement and the narrative. Then we met with the band to define what they had in mind and we worked together to produce a script.

The aesthetic of the film was intended to immerse the spectator in that strange universe, somewhere between Under The Skin and Midnight Special. The VFX were a real challenge. We tried to add the plastic beauty of a perfume commercial. Our model Celine Delaugère was perfect for this role and we tried to magnify her unique beauty with the framing too.”

Named after a preset from one of their synths, Dead Sea’s first cut has elements of Shoegaze and Krautrock with soothing, ethereal vocals. The track was written and recorded by Dead Sea, mixed by Aaron Bastinelli and mastered by Mike Marsh (Phoenix, Oasis, The Chemical Brothers).

Caro from the band said the following about the track:

“8.50 is the number of a preset from one of our synths and the sound in question is the first one you hear when the song starts. More than chord progressions or song structures, what primarily matters to Charles, Julien, Alex and I when composing are the colours and consistency of the sounds which eventually come to form a balanced and harmonious block. In terms of lyrics, I always improvise to set the melody first. Most of the final words make it through that way. It is a bit like what we call « écriture automatique » which consists of writing whatever pops into your head without trying to intellectualize anything. I do change some words from time to time to try to avoid contradictions or overly blurry concepts, but I like to keep things organic and sincere. The lyrics to 8.50 came that way and, despite the relative sadness they convey, their association with this lingering melody makes the song quite healing to me.”

Following a premiere over at DIY Magazine who described the track as “lurching forward with synthetic drums so propulsive that they could fell buildings” (read here) ‘8.50’ is available to purchase, stream and share via these services:

The band has also been invited to perform as special guests of Slowdive at their Paris show on 2nd April 2017 at Le Trabendo.