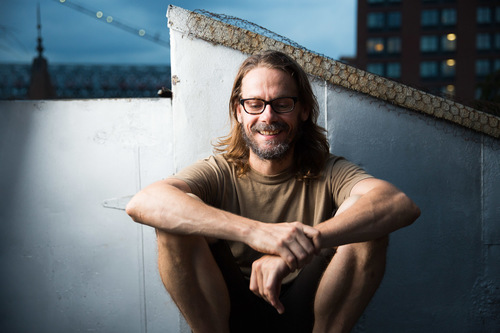 IMAGINARY TRICKS
ANNOUNCE DEBUT ALBUM SKOMMEL,
OUT 24 MARCH 2017 VIA FRIENDSHIP FEVER
FIRST SINGLE “BIRD” PREMIERES VIA STEREOGUM
Imaginary Tricks – a.k.a. singer and multi-instrumentalist Mike Visser, formerly of Sacramento, CA band Frank Jordan – will release his debut album Skommel on March 24, 2017 via Friendship Fever, a new Sacramento-based label distributed by House Arrest/Fat Possum. First single “Bird” premiered this week viaStereogum, who wrote that; “It is a head-nodding, slow-building rock song that feels soft and pretty despite Visser’s impassioned vocal and the steady rhythmic pounding that carries it along”; listen below:
Welcome to the world of Mike Visser, the world of Imaginary Tricks.  His debut album Skommel builds upon a lifelong affair with guitar noise and love for buttery R&B classics. These songs are reflections of psych-tinged rock and pop obsessions, abused by years of a relentless search for something stranger, stronger, and free. Imaginary Tricks takes an experimental approach to delivering a familiar thump. It’s a heartbeat, with multiple layers of complex sounds, mired in soul and hidden lyrical depth.
The songs on Skommel are poignant and varied, from the surefire pop hit of  “Night Owl,” which captures the universal feeling of staying up at night, worrying yourself to bits. There’s the rugged and rhythmic “Lights Out,” addressing the distribution of wealth in the Western world and in the disarming “No Ordinary Guy,” Visser details his father’s immigration from South Africa to the United States.
Listen closely, and you’re inside the room with him, in the eye of a storm, whipped up by whatever inclination strikes: whistles and wah-wahs, Doppler-effect vocals and alien Wurlitzer keyboarding. For his captivating live shows, he is joined by Harlan Muir, who contributes an alchemy of sounds, combining keys and tape delay. The results are intoxicating.
Much of Skommel was drafted and recorded at Japam Studio in Brooklyn. Conjuring up a romantic picture of a dank and dark place where the songs were pounded out night after night until they took shape would be a cool notion. But Imaginary Tricks songs are written in Visser’s head—one can only imagine what goes on in there—and then sketched out here, in the real world, for us to hear. Can colours, thoughts, dreams and sideways conversations be translated into words and music? After listening to Skommel, it just might seem possible.

A full track listing and cover artwork are below.