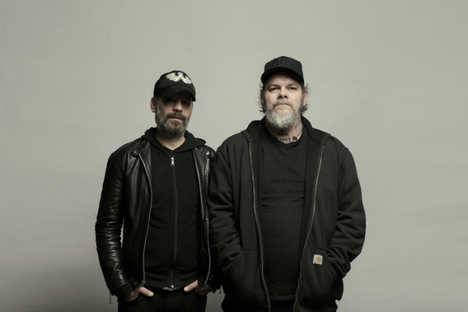 Mirrors For Psychic Warfare is the latest collaboration between Neurosis’ Scott Kelly and Buried At Sea’s Sanford Parker. The band’s unsettling self-titled debut is the sonic manifestation of insomnia, complete with the tossing, turning, and perennial dread that comes with facing another shabby daylight.
The five songs that comprise Mirrors For Psychic Warfare lurch and pulsate across a sullen, desolate landscape with an almost curious obsessiveness. Kelly’s distorted guitar and Parker’s electronics tug the sound towards exploratory and grand soundscapes. It is the union between the two that makes Mirrors For Psychic Warfare such a unique and unfamiliar listen.
LISTEN TO MIRRORS FOR PSYCHIC WARFARE
Mirrors For Psychic Warfare was realised and recorded by both Kelly and Parker at Actual 13 Studio and Hypercube respectively over the course of 2015. The record was mixed and mastered by Parker and will come available in CD and vinyl form. This is not the first occasion where Kelly and Parker have joined forces. The two work together in Corrections House, a project that also features the talents of Mike IX Williams of Eyehategod, and Bruce Lamont of Yakuza, and where Corrections House seem hell-bent on impersonal bludgeon and unrestrained panic, the pair’s latest project – Mirrors For Psychic Warfare – is far more restrained.
“Kelly and Parker deal in a form of debased, defeated industrial future-folk, a zoned-out space cluttered with crunching metallic debris. Some of the quieter moments skirt the dreaded dark ambient category – but that subgenre always seems to suggest hokey cyberdelic techno-sabbats or the Hellraiser sequel in which chief Cenobite Pinhead sashays around on a spaceship. By contrast Mirrors For Psychic Warfare seed concerns about depleted stocks of tinned food and the likelihood of typhoid.”– THE WIRE
“Restraint is relative, and there’s definitely some noise to be found here, and no shortage of passion. Sonically, however, the maelstrom definitely simmers, with cold-as-ice production tempering the mood. Everything is channelled, focused and chiselled down, distilled into a dense and seemingly impervious sonic slab.” – AURAL AGGRAVATION
“Ambient(-esque?), but tense and brooding..” – DECIBEL
http://www.neurotrecordings.com
http://www.facebook.com/neurotrecordings