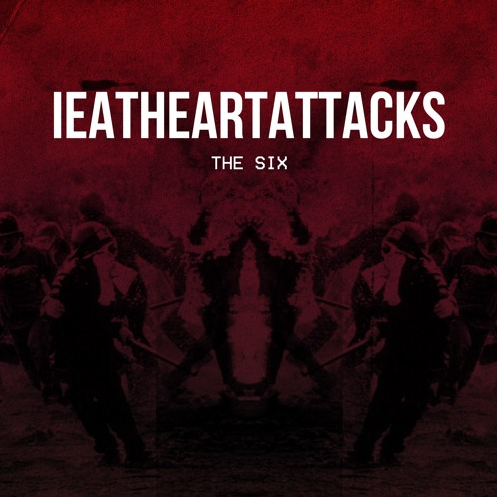 Norwegian trio Ieatheartattacks are by no means any strangers to the site, the three were first introduced to us by one of our writers with strong nordic ties and one that is often overseas enjoying the beautiful country in all its glory- Simon Gore. Simon bought tis band to our attention and highlighted the talents to the band during his travels, instantly we were hooked on the creativity this act convey.

ieatheartattacks, the scandi hardcore three piece consisting of Jompi Myren, Noppers Myren and Erik Fossmo have a profitable year for their outfit ahead. With the highly anticipated release of a forthcoming album in the works, the musicians are about to reap the rewards of their hard work following the new, dynamic and distinctly courageous single release they’ve just unveiled to the world and the perfect taste as to what’s to come on the full length.

The band are celebrating a rewarding milestone as they see the release of their flawless single ‘The Six’. The quick firing composition propels the listener in it’s full force, hard hitting, aggressive nature. ‘The Six’ captures the acts ability to effortlessly sound bigger, brasher and more forceful than every six-piece metal band. The hardcore noise act wrote the song about police brutality in Baltimore, where the shooting of Freddie Gray occured.

Listen to the compelling release in full below-

To coincide with the release we had the pleasure in chatting to the three to find out more about their inspiration, the recording process, their live scene in Oslo and more.

Before we get to the details of your new single release ’ The Six’  due today, Tuesday 19th, we want to get to know more on you. Introduce yourselves and how long this promising outfit has been established

The band started out in 2012 as a duo with brothers Jompi and Noppers Myren. We listened to bands like Snöras and Refused and The Blood Brothers, and thought that it would be cool to play in a hardcore band.

We want to know what are your collective influences that shine through in your work?

Snöras, Kaospilot, The Blood Brothers and a lot of compromise.

Where did the band name come from?

The band name comes from a Blood Brothers song, which is called “The Salesman, Denver Max”, in which a bit of text says “My name is Denver Max, and I eat heart attacks.” We thought it sounded cool, and being fans of The Blood Brothers, we took that as our name.

Our sound has evolved from our first release “…and Pianos”, from being more distorted and basic to being more aggressive and “punchy”-in-your-face. We have taken more of the punk sound and added a bassguitar instead of just being a guitar/drums outfit.

We would love to know the ins and outs on this release. Describe your writing process together/recording process and how you’ve managed to get to the point of this standout effort.

We start out with making just the instrumental bits, and then we add text afterwards like we do with all our songs.

The single ’The Six’ is taken from your forthcoming album due later in the year, can you tell us more about the album, is it finished and what can we expect?

We’re going to the studio again in May, to record the final tracks. You can expect a more aggressive, harder album than you’ve heard from us before.

Tell us about the Norweigan live scene where you are based?

Right now, it’s decent in many cities around Norway, but in Oslo (where we live) it’s starting to pick up on some really good bands, in our opinion.

It’s a close call between two songs on our upcoming album, one of which is going to be our second single coming this fall. Stay tuned to learn more about it.

What’s the strangest venue/atmosphere you’ve played at to date?

We feel there’s a strange aura about a venue in Trondheim. There’s nothing wrong with the venue, but everytime we have played there, some strange shit has happened to either us or the instruments. The audience is always good there, but either the equipment suddenly breaks down or some of us are hungover or something like that.

Is there any country you’d love to come and play and if so why?

We would love to come and play in England, maybe Japan, Germany – we want to experience a different audience than the standard Norwegian scene. So just book us a gig and pay for our flight, and we’re there!

Don’t release your album in October (norwegian bands). You know who you are.

A pleasure, thank you so much for spending time with us on your single release day and you guys have a place to crash if you get to the UK.