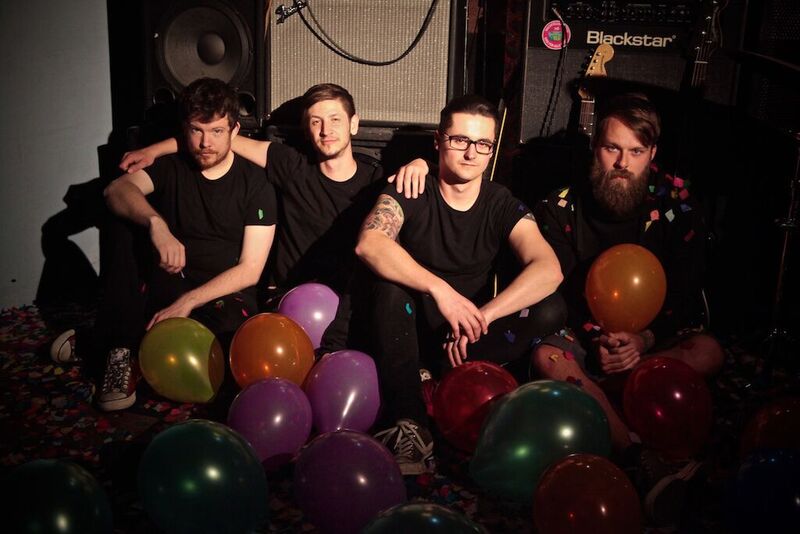 Hailing from Nottingham and Derby melodic rock quartet Merrick’s Tusk (named after the Elephant Man, Joseph Merrick) are band that have drawn a route through the familiar sonic territory of emo-rock with signposts to bands such as The Appleseed Cast, American Football and Jimmy Eat World to draw you in but with more than enough originality in their post-hardcore sensibilities to keep you there. The band’s second release, a 6-track EP titled ‘regroup and reform’ which is founded on the life experiences of frontman John Jeacock, features cameos from BAFTA-winning composer Nicholas Hooper (Harry Potter soundtrack composer) and once label-mates Bear Makes Ninja, Blind Wives and Some Skeletons, the follow-up EP delivers a more expansive and ambitious sound.

Architects of intense contrast the band’s diverse and precise instrumentation regularly flirts with the fragility and weight of the emotionally driven heart-on-sleeve lyrics, flittering between huge anthem-to-be, shout along gang vocals, delicate and intricate guitars and decisive drum work. Tracks such as opener ‘25’, throw you back to Casually Dressed-era Funeral For A Friend-esque resonance, making you feel like you are rediscovering a long lost favourite track, whilst littered with memorable lyrics and stadium-ready melodies that are likely to make the track a new favourite for first time listeners. Tracks such as ‘Solitude’ and ‘Kepler’ can make you feel like you are listening to a completely different record delving into the niche and nostalgic world of 90’s emo but instilled with the same unique vocal delivery, suspense-filled transfiguring uplift and release. It is this wide spread set of divergent dynamics that makes Merrick’s Tusk’s new EP so inimitable despite the familiarity that resonates from the bands multifarious influences.

‘Sonder’, Merrick’s Tusk’s debut EP, was released on Bad News Records to critical acclaim in June 2014 and has led to the band performing with artists such as Jonah Matranga (including sharing a stage to perform the Far classic ‘Bury White’), Cleft, Tellison, More Than Conquerors, We Came From Wolves, 100 Onces, Polymath, Wot Gorilla? and more.

‘regroup and reform’ will be self-released in conjunction with the estimable Buttonpusher DIY on 1st April and will be see the band hit the road again touring across the UK, Europe and various festivals in 2016. Speaking on what comes next for the band John (Singer/Guitarist) says, “We want to get out and play as many shows and festivals in Europe as possible this year, meeting lots of lovely people. Then we plan to push our sound as far as we can, continuing our work on a debut album for 2017.”

Merrick’s Tusk are evolving musically and with every sonic state they encounter the band are finding new ways to push the boundaries and instil originality. This is an EP full of tracks that are begging to be your timeless rock anthems of the decade, and we think you should let them.