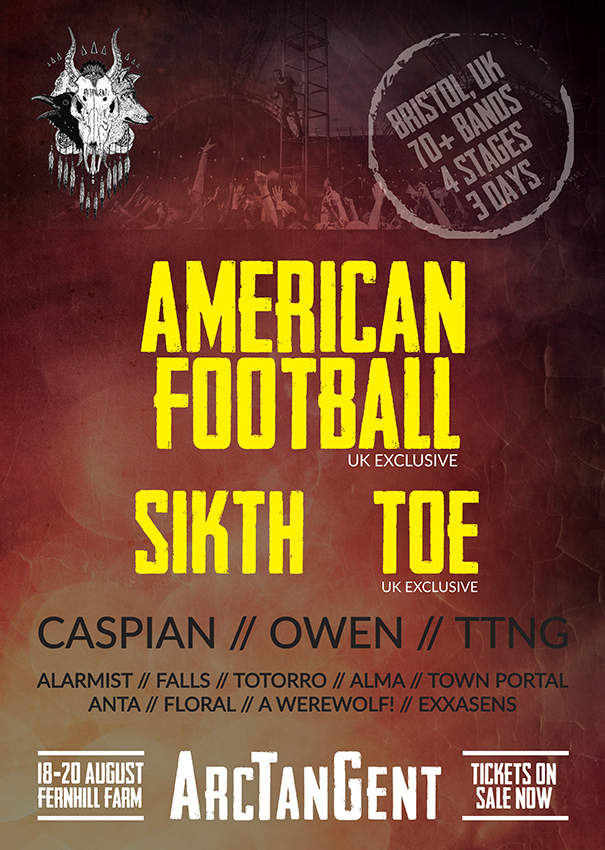 PREPARE YOURSELVES FOR THE FIRST ARCTANGENT ANNOUNCEMENT OF 2016…….

TICKETS ON SALE NOW. THE FIRST 1,000 BUYERS WILL BE REWARDED WITH FREE BEER AT THE BAR!

The world’s only festival for connoisseurs of Math-rock, Post-rock and Noise-rock – the award winningArcTanGent – is back!!

Tickets are on sale now from www.arctangent.co.uk/tickets

ArcTanGent’s grand master band booker James reckons: “Once people have been to ATG, they seem to come back every year. It has this amazing sense of community and really feels like we’re all part of a secret club that the rest of the world doesn’t know about. Watching an unknown, but amazing, band play at midday to a thousand people really helps with my faith in humanity! But nothing compares to 5,000 people gathering to watch the headliners – American Football this year will be out of this world and I guarantee that ArcTanGent 2016 will be the best weekend of the summer!”

Director general in charge of good times, Simon Maltas explains there is also a special treat in store for loyal fans: “we really wanted to reward those fans that have been with us from the beginning so the first thousand people to buy a ticket will get £10 in beer tokens to spend at the bar! I’d expect these to go with in the first couple of minutes though so be quick!” Tickets for ArcTanGent are on sale now from www.arctangent.co.uk/tickets .

Mark Mulcahy shares video for “What If I Go Off With Bob?” + UK tour kicks off 31st August