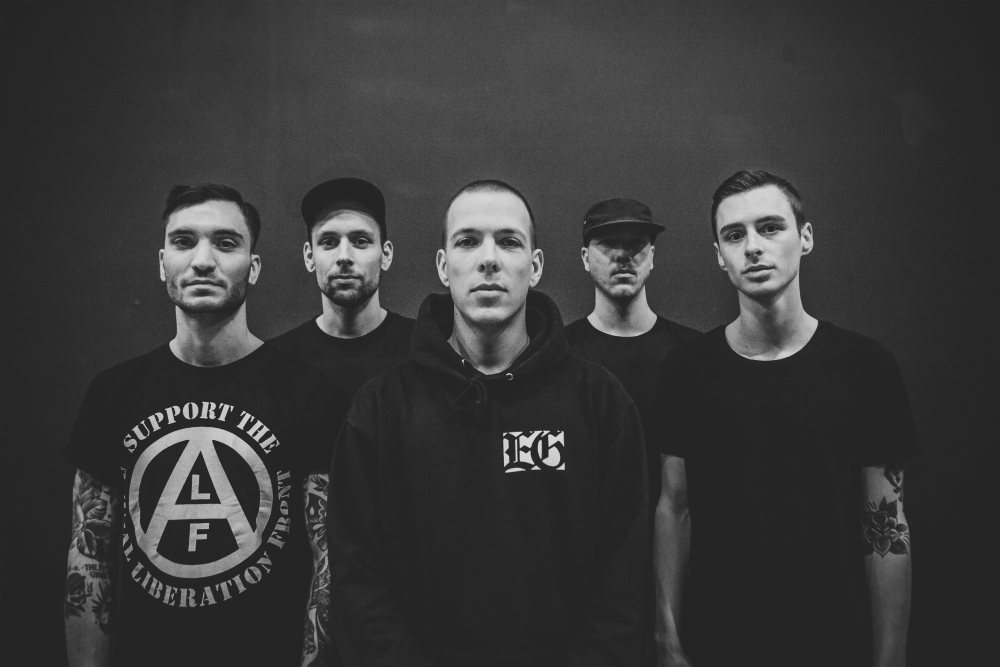 WOLF DOWN release double music video for ‘Incite’ and ‘Conspire’

The tracks are taken from forthcoming album ‘Incite & Conspire’

UK Tour with Stick To Your Guns, Stray From The Path, Counterparts in Feb

“‘Incite’ and ‘Conspire’ are complementary songs dealing with the rage about social and political injustices, as well as the widespread apathy in our society. They are a metaphorical call to arms for anyone that feels the spirit of revolt in their hearts, for anyone that won’t bow down to authority, for anyone that shows resistance to all kinds of oppression.” – Wolf Down

Ahead of the release of their second album ‘Incite & Conspire’ via BoySetsFire’s End Hits Records on 26thFeb, 2016, Germany’s Wolf Down have released a double feature music video for title tracks ‘Incite’ and ‘Conspire’ (the latter featuring guest vocals from Jesse Barnett of Stick To Your Guns). These two compositions are indicative of the album’s themes and the band’s ideals. The album’s release coincides with Wolf Down’s next stint of shows in the UK as they head out on tour with Stick To Your Guns, Stray From The Path and Counterparts in February. Dates below.

Starting their journey in 2011 with their debut EP ‘MMXI’, Wolf Down have put themselves firmly on the international hardcore map, touring tirelessly in Europe, Asia and Russia. The ‘Liberation EP’, released last year, not only marked the debut of vocalist Dave, but also offered their most uncompromising mix of metallic hardcore to date at that point, fuelled by radical political content and drawing comparisons to bands like Hatebreed, Bitter End, The Ghost Inside and Trapped Under Ice.

With their second LP, Wolf Down are now poised to become one of the most important bands in their genre. Produced by Dominic Paraskevopoulos in the Level3Entertainment Studios (Kreator, Caliban, Arch Enemy) ‘Incite & Conspire’ sounds even more powerful than any of the band’s previous work.

The eye-catching artwork by Donny Philips (who has worked with Mastodon, System Of A Down and Stick to Your Guns) clearly relays the message that Wolf Down is trying to convey has by no means mellowed with age. The eleven tracks offer a holistic view on the problems of our time: A central theme of the LP is the direct link between human rights, animal rights and the fight for the preservation of our planet. From the call for active environmental protection in ‘Protect / Preserve’, to the denouncement of the abuse of power in religious institutions through ‘True Deceivers’, right up to the demand for the abolition of all cages and the plea for a vegan diet: Wolf Down make it clear that it’s not possible to solve the massive issues they address without recognizing their coherences.

If you want to talk about Hardcore in 2016, you will be talking about Wolf Down. Or in the words of Jesse from Stick To Your Guns: “Wolf Down come from the underground but their truth will not stay buried there.”

The LP will be available digitally and as a limited vinyl (transparent, red and black) and as a digipack:

UK TOUR w/ Stick To Your Guns, Stray From The Path and Counterparts

8. Conspire (feat. Jesse Barnett of Stick To Your Guns)