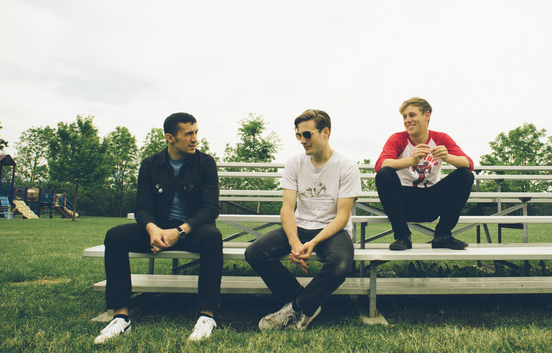 The Dirty Nil have premiered their cover of Fugazi’s “Provisional” via Alternative Press, to be featured on the B-side of their upcoming 7″ No Weaknesses b/w Provisional, which drops today digitally via Dine Alone Records and is now available for pre-order. Alternative Press describe The Dirty Nil’s take on “Provisional” as “staying true to the track’s original structure, the trio also manage to bring a new sense of vibrancy to the table.”

Listen to “Provisional”
The Dirty Nil embarks on a US tour with Meat Wave next week which includes multiple stops at CMJ where they will play several showcases next week, including performances for The Planetary Group and APA (all CMJ & tour dates below).

Over the past four years The Dirty Nil have released a handful of 7” singles, mixtapes, EPs, and limited edition lathe cut records, while persistently touring all over North America. The latest in these efforts, No Weaknesses b/w Provisional, features the double edge sword of breakneck violent fuzz and pure anthemic catharsis; a combination of unhinged punk rock noise and stick-in-your-head pop melodies. The listener has no choice but to feverishly scream along. The b-side Provisional takes a classic Fugazi cut and amplifies the blistering rage.

Hailing from Dundas Ontario, The Dirty Nil consists of Luke Bentham (Guitar/vocals), Kyle Fisher (Drums), and Dave Nardi (Bass/vocals). The band works as a cross section of the most essential parts of rock and roll. Windmill heroics and smoke guitar theatrics sit side by side with uncompromising noise, feral energy, and deranged enthusiasm. The trio are taking their intense live show on the road through North America with Meat Wave this fall, all dates are below.

The Dirty Nil play rock and roll – cause they couldn’t do a damn thing else if they tried.

No Weaknesses b/w Provisional is only a taste of what is to come – the band has their first full-length album slated for an early 2016 release on Dine Alone as well. It is currently being mixed by John Goodmanson (Sleater-Kinney, Death Cab For Cutie, Unwound).

A) No Weaknesses
B) Provisional