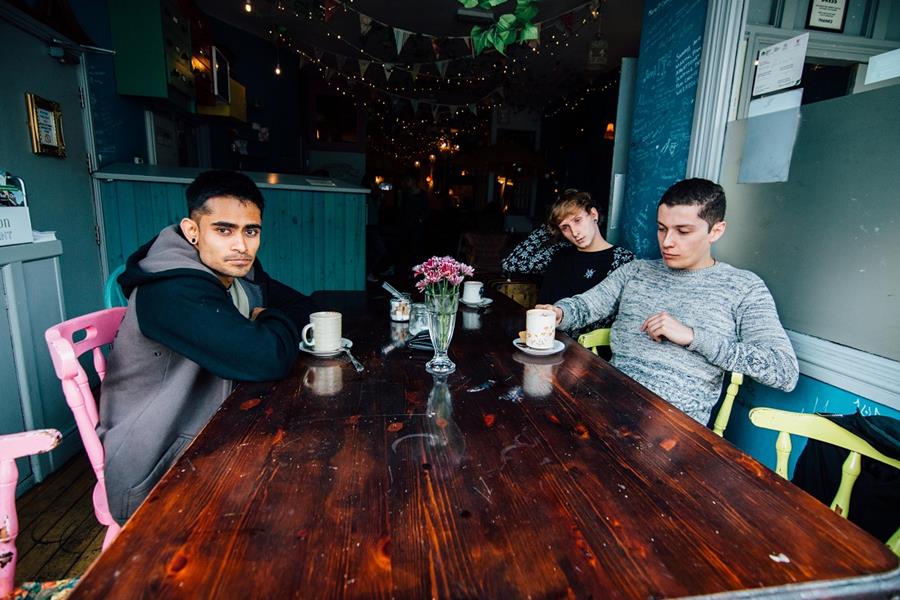 Having built strong hype in the Cardiff and Bristol alternative music scenes by becoming staples of now legendary house shows, young trio Glue Foot have taken their own brand of pop punk and grunge around the country in their 1999 Suzuki Swift – affectionately known as “Suzie”.

Glue Foot began during the summer of 2014 after lead vocalist and guitarist, Matt Fleet, successfully persuaded his university coursemate (and now bassist), Shyam Pankhania, to attend a rehearsal with long-time partner in crime and drummer, Joe Cooke. “The people living below my flat would always bang on the ceiling or give us sweets in the hope we would turn our guitars down late at night – we would practice every day”, recalls Matt. Shyam brought flare and ingenuity with his bass playing – writing basslines that complimented the reflective nature of Matt’s songwriting.  Joe also brings something extremely special to the table. Influenced by the feel and style of drummer Matt Helders as well as the unique qualities of Matt Nicholls (Bring Me the Horizon), Joe uses interesting grooves and an element of musicality to support the other instruments.

Following the release of debut EP “Mission Happy Face” (which was recorded primarily to send to promoters across the country), Glue Foot played clubs and house parties extensively in the UK (with the likes of ROAM, GIANTS and more), swiftly generating a following. Excited by their progress, the band were still surprised at the reception they were receiving at shows: “people would dance, sing along and crowd-surf – even encouraging us to crowd-surf with them!” tells Joe. Their second EP, “Seed”, takes a grungier path than previous material, with songs such as “Silk” and “Floating Like A Leaf”. “We really want to make an impact with “Seed” – we have invested so much emotion in it”, states Matt.

Following the release of “Seed” and the video for single “Floating Like A Leaf”, the band are planning to take their music across the UK with more energy than ever before. “We really want to provide everyone that comes and sees us with an experience they won’t forget. We really love what we are building here and it seems a lot of other people do too”, reflects Shyam.  Make sure you are there when Glue Foot – and “Suzie” – arrive in your town.