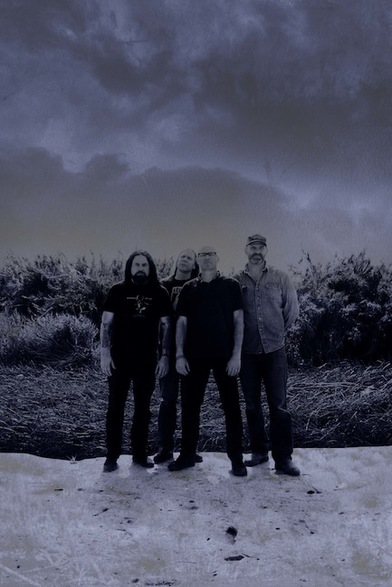 Goatsnake’s mighty new LP, Black Age Blues is available now worldwide through Southern Lord Recordings. In stores now, the crushing album is also streaming in its entirety, as the band continues their European tour in support of their first new album in fifteen years.

Black Age Blues on CD, 2xLP in a Stoughton gatefold jacket with two exclusive bonus tracks and more can be ordered at the new Goatsnake store, and the album is available digitally via BandCamp and iTunes.
Following their packed local record release show for Black Age Blues, and a crushing performance at Maryland Deathfest — the band’s first East Coast US show ever — Goatsnake is currently touring Europe. Having already stormed Temples Festival last weekend, the band continues to bulldoze across the continent with a headlining set at Siegen, Germany’s Freakvalley Festival on June 4th. Upon their stateside return, June 20th will see the band headlining Crucialfest in Salt Lake City, Utah.
Goatsnake Live Actions:
6/07/2015 AN Club – Athens, GR
6/20/2015 Crucialfest – Salt Lake City, UT [info]
Goatsnake’s Black Age Blues closes a fifteen-year gap between full-length albums from the revered act, without a doubt making it one of the most highly anticipated doom/metal releases of 2015. With nearly fifty minutes of their most soulful yet boisterous material to date, the quartet expands their already mammoth tones and pummeling rock riffs with a variety of additional influences and elements, and guest contributions from a variety of players including David Pajo (Slint, Aerial M, Papa M) and soul vocal trio Dem Preacher’s Daughters, comprised of Wendy Moten, Gale Mayes and Andrea Merrit.Black Age Blues is an instant classic, with each one of the nine songs an anthem, and each of the four members of Goatsnake  in top form. Everything is magnified; the vocals of Pete Stahl (Scream) vocals have never sounded so powerful, the rhythm section comprised of Greg Rogers (The Obsessed) on drums and Scott Renner on bass is the driving force on each track, and the riffs of guitarist Greg Anderson (SunnO))), Southern Lord Recordings) are heavier than ever before. Recorded and mixed at Rock Falcon Franklin, Tennessee by Nick Raskulinecz (Queens Of The Stone Age, Foo Fighters, Alice In Chains, Mastodon, Rush) and mastered by Brian Big Bass Gardner (N.W.A., Stevie Wonder, Parliament), the production values of Black Age Blues back the top-notch musicianship, creating a seriously unstoppably entertaining album.
“On paper the patterns are simple, but what the band does with them is nothing short of breathtaking, even aside from the simple appeal the album carries with it for fans through the simple fact of its existence. Sounds like hyperbole, but the blessings Black Age Blues bestows are not to be undervalued either for their heaviness or the individual presence at work behind them, and five years after their first reunion set, 15 years after their last album, Goatsnake may be the most vital they’ve ever been.” – THE OBELISK
“No one else writes songs or even riffs like the ones here” – METAL HAMMER
“An undeniable reminder that Goatsnake is doom royalty” – AV
“Whether it’s because of the aforementioned life experiences or simply because their skills as musicians and songwriters are better honed, Black Age Blues is the most substantial release of Goatsnake’s career. Musically, there is more of an infectious blues edge to their take on the classic Sabbath blueprint… Goatsnake’s heavy rock is more palatable on Black Age Blues than on previous efforts.” – LA WEEKLY

TACOCAT share new single “Hologram”- New LP ‘This Mess Is a Place’ due May 3rd via Sub Pop!