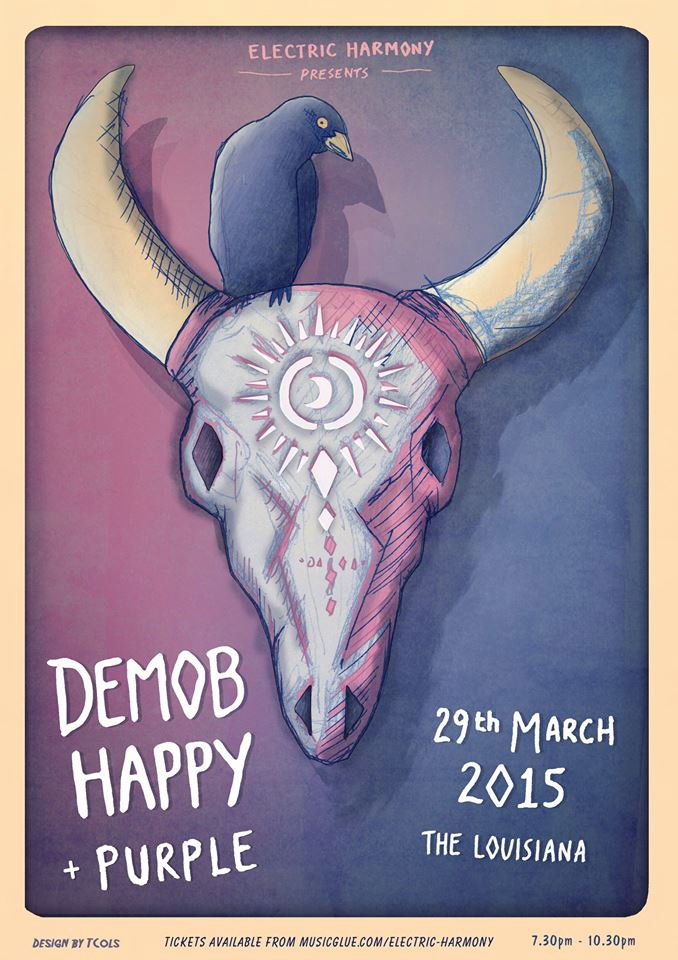 Electric Harmony proudly present the third showcase event at The Louisiana… on March 29th, we’re joined by the incredible lads Demob Happy with support coming from the mighty Purple!!

Demob Happy left the UK’s small venues smouldering last year after unleashing their impulsive garage rock wrath on their debut October tour. Last year’s scuzz-ridden debut single ‘Succubus’ was met by a wave of acclaim from the likes of the Guardian, NME, DIY, Q, Classic Rock and many more gaining them a spot in the NME’s ‘50 New Bands Set To Storm 2015’ list, and a date at DIY’s ‘Hello 2015’ show at the Old Blue Last this month supporting Girl Band. ‘Succubus’ also received airplay from BBC Radio 1’s Zane Lowe and Phil Taggart.

Whether it’s battling in court for their gear back from the noise police, making music videos on a £10 budget, or recording and producing everything they do themselves, then returning the gear to the shop afterwards for a refund – Demob Happy didn’t get it easy, they just made it look that way.

Catch Demob Happy on tour in March/April 2015 and expect an EP coming for April 2015.

“A joyride through rock’s sleazier back alleys” – The Guardian

“The gutter, the gulley, THE GIRTH!” – Phil Taggart, BBC Radio 1

Beaumont, east Texas is an oil town. The black gold was first struck in 1901 and the population tripled within a year. It sits over near the Louisiana state line, a half hour inland from the Gulf Coast with its vast stretches of golden sands. Notable Beaumont alumni include plenty of modern day JR Ewing’s, plus slap-bass originator Larry Graham, bluesman Blind Willie Johnson, ill-fated 50s singer The Big Bopper – and now party rockers Purple.

Don’t be put off by that tag: this is a party you want to be at, Purple the three sardonic outsider school kids who grew up to become the coolest gang in a town that drains cultural ambitions like it sucks up the Texas tea. Half their friends ended up in their refineries. Some couldn’t take it; some ended their lives. Were our young charges going to let their lives follow the same path? Hell no. Because Purple chose something else. Purple chose to party.

Purple play pop music. Messy, dirty, raucous, grit-spitting, tequila-glugging pop music. They do not apologise for this. They have a big streak of it running skunk-like up their backs and through urgent tunes full of indie-punk snarl and piss and vinegar, but driven by grooves deep enough to rival any hop-hop classics. They are wrestling pop away from the world of vocoders, slick dance routines and coquettish airheads and bringing back to where it belongs: to the beach, to the house party, dancing on the table in that bar you need a fake ID to get into. They like to bare flesh and play until they bleed.

Listening to Purple quickens your pulse. Gives you the sweats. Has you reaching for a cold one. And then another. And then ten more. They make you feel alive. They are good for you.

The event
The Tickets
The Playlist