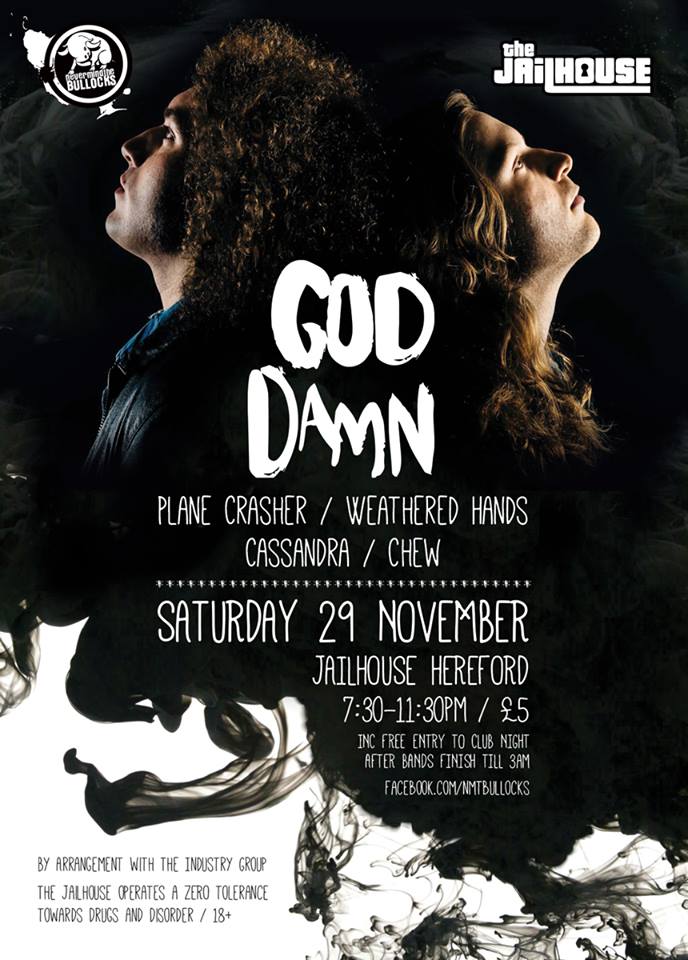 For those familiar with our articles you will recall a live review of the return of local Herefordian promoters Never Mind The Bullocks and their show at The Jailhouse, following on from that review we are delighted to tell you more about their forthcoming follow up show at the end of November featuring a fantastic line up including God Damn– double loud rock music, Planecrasher– Loud, dirty punk, Weathered Hands– Emotive Hardcore Punk rock, Cassandra– Garage Indie Rock and Chew– Alternative upcoming act.

NMTB are no strangers to Circuit Sweet, the hard working music promotions company have introduced us to some incredible bands on our Herefordshire doorstep, following a 3 year hiatus NMTB returned in September of this year and with an unmissable show. Now with the next show in tow, we speak to Brendan – promoter of NMTB to find out what’s next for Hereford’s live scene….

Firstly, thank you again for giving us some of your time. Last time we spoke, we discovered why you’ve returned and details surrounding the live return. On the 6th September you hosted your successful return show- how did you feel it went?

Thanks for your support for NMBullocks shows, much appreciated. The September return went fairly well, was a long old run up and was happy to be back to it. Was hoping for a bit of a better turnout for the bands playing and financially as lost a little bit on the night, but nothing really in scheme of things and realise have to work hard to build support back up again after such a long stretch away.

EMPIRE, Richa, Holy! and Aulos were among the bill- how did you discover each of these acts and why were they the right act for the night?

Aulos were one of my favourite local acts back when the shows were running before, that hasn’t changed even though their line up has. It was really nice to a band like Aulos back for the return.

Holy were recommended to me by a few people after a band had to drop out of the night and went on that when asked to play but saw them live over Worcester way before the show and knew those recommendations were solid.

They may have moved down south but consider Richa a great local act and really liked the tunes and videos they have online. I caught them live a month or two before the show and impressed for sure.

When looking for a touring headline act – I stumbled across EMP!RE online, loved Joe Green’s vocals and their eclectic mix of styles. The fact they were so different I hoped they’d appeal to a wide audience and could select a mix of different bands to support. It’s more often than not difficult to convince touring acts with agents to stray off the beaten track and visit Hereford so was lucky to get them here. I hope those that saw them at The Jailhouse enjoyed their set as much as I did.

Shouldn’t forget the acoustic open mic stage too, really appreciated them all playing, especially after a bit of a soggy start with rain meaning stage had to be rushed indoors. Will look forward to seeing Rope & Field again soon, should be interesting when they get a drummer involved. Was cool to see Footdragger perform for the first time too, excellent.

What was your highlight of the evening?

All the acts were great, just felt good being back promoting again.

You’ve just announced your next live night, November 29th at The Jailhouse- tell us more.

Very excited about bringing God Damn to Hereford. Genuinely one of my favourite finds this year and think they are on an upward trajectory for sure and chuffed to have been able to book them possibly at the right time.
One of the things have thought would change from the return for the future for alt / rock type shows is an earlier kick off and finish – May have gone on a bit late for a regular gig live audience and for the bands involved. So for the next doors are a little earlier and bands will be done by 11.30pm. Folks are then welcome to stay for regular Jailhouse club night afterwards till 3am.

How did and why were headliners God Damn ticking the boxes for you to bring to Hereford.

First I love their music. They are loud and great energy about them. They make awesome videos. They’ve toured with top acts like Pulled Apart by Horses and will be heading out on tour with Turbowolf just days after the Hereford show.They’re based in Wolverhampton so not a million miles away which may have helped when booking. It was easy to book them in the knowledge that had a few local support acts in mind who’d be an ideal fit. Finally, got to love a loud two piece.

NMTB are a local promotions company which we can credit for always supporting and showcasing local acts, on the bill for the next event are Plane Crasher, Weathered Hands , Chew and Cassandra what can we look forward to from these four acts?

Plane Crasher are another of my favourite local acts, have been since their earlier incarnation as Tastyhead. They make great noisy rock, I like that – Hereford should be proud to have unleashed such a great band. It’ll be interesting to see who’ll be louder on the night – Plane Crasher or God Damn.
I caught Weathered Hands at The Victory a few months back and they were excellent, heavier than I expected, which was a good thing and an easy local pick for this show. Though Weathered Hands are now based down south and as they wanted to put a mini tour together around this gig with another local act Chew to make it work I was happy to have them play too, saw them at the same gig as Weathered Hands and impressed.  Also on the bill are fairly new local act Cassandra, have caught them a few times now and enjoyed and think far, far better seeing for yourself live than their early facebook videos suggest. Am looking forward to seeing them progress.

Describe in one word, why we must see this unmissable show!

Is there anything new from NMTB that you are excited to promote/ or anything that makes the well overdue second show stand out?

Keeping it simple – A show with a great headliner supported by excellent local established and new upcoming acts.

Now you’ve got the promotions flair back, have you got many plans for NMTB, any more acts lined up or shows already planned?

I have some ideas and chatting to some bands about the next gig, but God Damn show is a little step up financially so might wait and see how it goes before confirming headliner and announcing. A very specific type of show idea with a visual element will hopefully come about in the new year. The shows are not for profit and if more folk attend will gain confidence and bit of extra cash to bring more established and interesting acts to Hereford in the future.

We know acts are wanting to put a NMTB show on their live catalog, anybody wanting to reach out to you how would they go about doing so?

Contact via the nevermindthebullocks.co.uk or facebook with links to music, vids etc. As only running shows every couple months at them moment and keen to support local talent it’s more likely will be keen to hear from you if an act from Herefordshire or the surrounding counties who are happy to support a touring headliner.

Thanks to anyone who attended the return back in September, hopefully see you again on November 29th along with some new faces. Run NMBullocks for the love of it but it does need to be self sustaining and hopefully it will be. Any support, by spreading the word about shows and attending is very much appreciated. Am sure other promoters and venues feel the same, support live music in Hereford! Cheers.

Thank you Brendan- we can’t wait for the next show!!

With just over a month to go until the show, save the date and get excited now, discover the acts below and let us remind you, pack earplugs to this unmissable event.