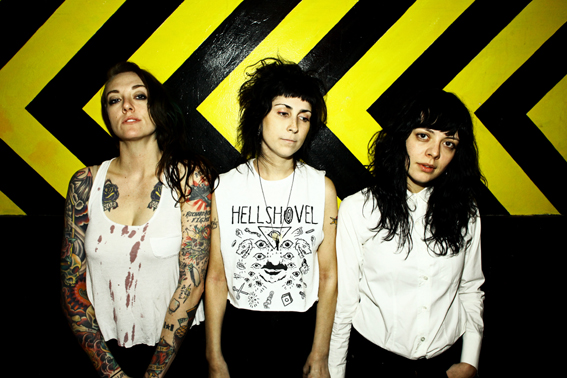 Dazed premier ‘Drive’ – the new video from The Coathangers
taken from their forthcoming album Suck My Shirt.Watch it HERE ON DAZED
“their power pop is rambunctious enough to start a moshparty, but taut enough to keep their tunes running around your head all weekend.” – Dazed

Suck My Shirt is the The Coathangers’ fourth full-length.  The title refers to an incident involving the salvaging of spilled tequila during the recording session for the album.  The group once again worked with Ed Rawls and Justin McNeight at The Living Room to attain the same production values of their Larceny & Old Lace album and their recent slew of split 7”s. While the band retains the alluring spontaneity and happy accidents of their early releases, the trio’s current work sounds far more deliberate and locked-in than anything they have done in the past.

“It’s a balance between overthinking and just going for it,” guitarist Crook Kid Coathanger (Julia Kugel) says of their songwriting strategy.  It’s a duality immediately apparent with the album opener “Follow Me”.  It’s a classic Coathangers tune with the raspy vocals of Rusty Coathanger (Stephanie Luke) belted out over the signature grimy rock laid down by Crook Kid and bassist Minnie Coathanger (Meredith Franco).  But the chorus opens into one of the most accessible hooks in the band’s canon, just before segueing into the next verse with a squall of violent dissonant guitar.  From there the band launches into “Shut Up”, a title that harkens back to the brash sass of their first record. The song still has its spikey guitar riffs and shouted chorus, but here The Coathangers sound less like a jubilant version of Huggy Bear and more like the art-pop of late-era Minutemen.  Dedicated Coathangers fans will recognize the re-worked versions of “Merry Go Round”, “Smother”, “Adderall”, and “Derek’s Song” from their run of limited edition split 7”s, and hearing them in the context of the album shows that these tracks weren’t merely isolated examples of the band’s more sophisticated side, but were actually demonstrative of the group’s increasing capacity for nestling solid melodic hooks and rock heft into their repertoire.  By the time the band wraps up the album with the humble pop perfection of “Drive”, it’s hard to believe this was the band that garnered their reputation with raucous bombasts like “Don’t Touch My Shit”.

Suck My Shirt will be released in the UK on 3rd November 2014 via Suicide Squeeze Records.  The band will be touring Europe in November.