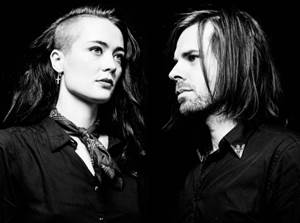 ‘This is Tarantino/Lynch style, warped, twisted psychedelic, & Western inspired music  heavy and Southern, and then drifts off into the desert, dazed by the scorching sun, dehydration, hallucinations and talking snakes territory’ – Louder Than War

‘Jon (Lost Souls Club) and Kitty (Lola Colt) bring back the kind of sound that musicians have forgotten how to master. It’s raw, bold, sexy and vast.’ – Music Gets Me By

Jon and Kitty met at a gig whilst playing in their respective bands and quickly bonded over their mutual love of Nick Cave and Jack White. In Kitty’s East London flat they experimented with ghostly guitar reverb, swirling Hammond organ and dirty blues harmonica, the result is brooding psycha-western no-nonsense rock n’ roll at its best; think Black Rebel Motorcycle Club with Ray Manzarek on keys and Kills-esque dual vocals.