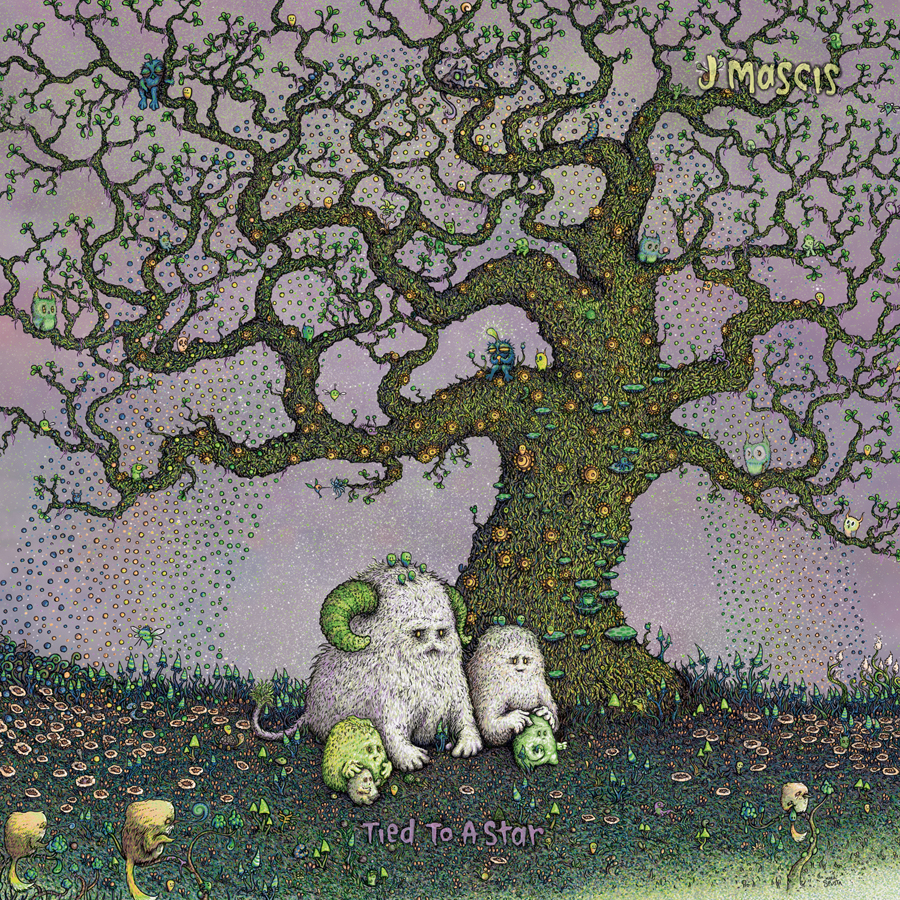 Picture this. You are in a marginally safe car on a humid summers evening with your closest friends, driving back home from a memorable weekend of good times, having collectively spent out whatever little money you all have. You’ve laughed yourselves out of breath more times than you care to count and witnessed unconscious acts of good will and civility. You know this moment will retain an emotional landmark within your memory forever. Immersed in contentment and a humble pride you recall what these people mean to you and how much you value such simple experiences in their company. Tied to a Star, the new solo album from J Mascis sounds like that feeling.

The multi instrumentalist has an impressive and varied back catalogue of musical achievements ranging from solo releases for charity to touring as a drummer and founding member for the band Witch. He even has a signature Fender Jazzmaster. His most notable and globally acclaimed work being that of his band Dinosaur Jr who have been impressing their fans since 1984. As a founder of the “tape culture” generation, J Mascis has pioneered a sound and guitar style that has influenced 2 generations and set a milestone in modern musical composition. The recognisable, trade-mark sound preserves on his latest release but without resonating oversaturation or monotony.

Over the past decade, acoustic music has disembarked a new level of disappointment. The once mighty acoustic guitar, a globally universal symbol of community and culture has taken an unwelcome battering from half-arsed, image orientated middle class, make-believe-folk acts and pissy pop princesses. Now an abused, irrelevant aesthetic in desperate need of the acceptance it once earned. Like a musical vigilante, J Mascis has restored the victorious instrument to the icon it has always been. Tied to a Star is a beautiful, 10 track acoustic record with dynamic deviation and a warming yet haunting vocal performance. The dual acoustic guitar panning provides for a delightful sonic experience. Although systematically compared to Neil Young, the vocal performance and instrumentation on this album are proportionate to the exceedingly novel Jon Frusciante. It also bares a possibly inadvertent likeness to the late works of Elliot Smith. Despite its compositional elements and technicalities reflecting similar bands such as Sonic Youth and Smashing Pumpkins, it also possesses hints of the lighter side of Led Zeppelin.

The opening track, Me Again is the perfect introduction to a monumental album. Like a photo of a lost loved one, it is a compelling tear-jerker yet an elated audio reflection of love and human connection. The following tracks lend a piece of period relevance from Dinosaur Jr’s counterparts, composed and arranged in an impressively original and superior fashion. This is a true soundtrack for devotion, exemplified by its empowering, honest and organic content. It shares enough compositional hooks with implementing, complex intricacies to satisfy any musical palette. An absolute must have, summer anthem. 10/10

J Mascis new solo album Tied to a Star will be available on CD / LP / DL in the UK from August 25th via Sub Pop.

Tied to a Star track listing:

Minus The Bear stream ‘The Lucky One’s from Lost Loves‏