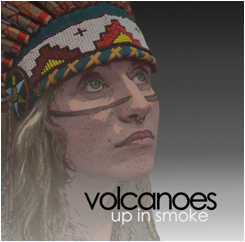 Volcanoes are paving their very own brand of indie folk, which is bound to erupt interest in the masses in no time –Artrocker Magazine

Murmuring strings and glowing, call-and-response harmonies that would prick up the ears of many a Fleet Foxes fan. Truly wonderful! – The Line Of Best Fit

When We Melodise is a beautiful construction of melodic strumming, oscillating drumming and glorious harmonies sure to appeal to fans of Fleet Foxes and Bon Iver. – Indie Shuffle

After a very successful campaign with their previous single When We Melodise, gaining attention from EMI, V2 andFourteenth Floor Recordings, getting support from BBC 2 and BBC 6 Music, taking part in T4 Orange Unsigned, and having finished in the top 20 of the Glastonbury Emerging Talent contest, Volcanoes have decided to indulge us with their latest track called Up In Smoke.

Up In Smoke describes what Indie music should consist of nowadays which is artistic and sonic freedom and authenticity to their fullest. Chiming guitars and warm flecks of staccato cello, combined with light washes of backing harmonies, create a peaceful and well-crafted aural treat from the word- go.

Kev and Sam’s lead vocals compliment each other throughout by accentuating the track’s strong lyrical moments. Resembling Great Lake Swimmers, Midlake and Iron & Wine, the overall production is more spacious and intimate than the previous record. It brings out the band’s subtle tuneful powers and distinctive personalities by focusing finely on their instruments, and by making a conscious decision to not include any high-tech studio-like gimmicks which modern songs are nowadays over-flowing with.

In other words Volcanoes deliver a genuine, scenic and meditative song, which will be available for sale and download everywhere from Monday 4th August 2014.