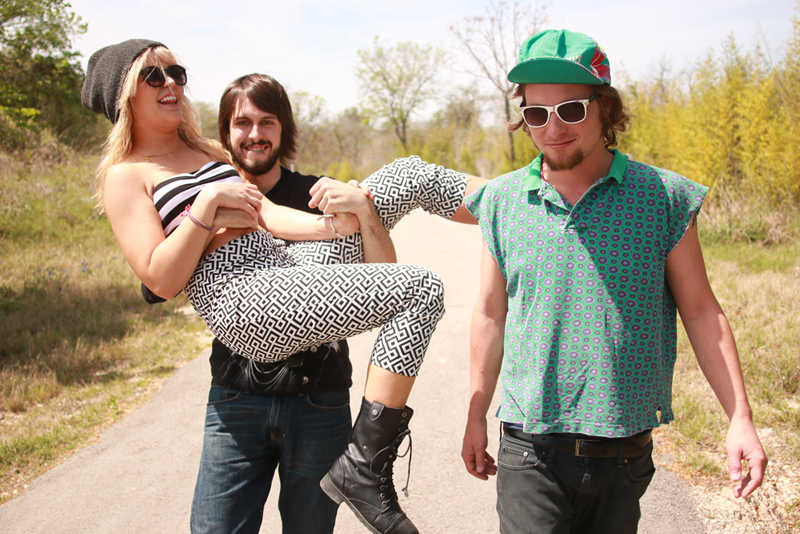 Purple are wrestling pop away from the world of vocoders and coquettish airheads and bringing back to where it belongs: to the beach, to the house party, dancing on the table in that bar you need a fake ID to get into. They like to bare flesh and play until they bleed.

This is evidenced by their riotous single ‘Wallflower’ – a joyously uplifting song that flips the usual script and sees a girl ardently – some might say aggressively – pursuing an admirer through the upended bottles, overflowing ashtrays and tangled limbs of a party: “I’m a girl – you’re supposed to be chasing me!” With definite shades of Bikini Kill and No Doubt it’s a one of the finest femme-punk anthems heard in an aeon.

For Purple, growing up in an east Texas oil town meant there was no other choice than to make music. While some of their friends ended up in the refineries, others couldn’t take it and ended their lives. Purple chose rock’n’roll as their escape. “Beaumont’s small,” says drummer and singer Hanna Brewer. “There’s a lot of really mean Christians and Mormons and cows and the only rock ‘n roll music that people seem to like is Stevie Ray Vaughan. It’s very Southern, man. Racism is big. Even in school amongst the teachers the attitude was: ‘if it ain’t white, it ain’t right’. Seriously. It’s messed up! And when I challenged them they would just say ‘Shut up you little hippy’. So I was the kid who everyone’s parents told them to avoid. I smoked weed but it might as well have been crack the way I was treated…”

Having met playing in other bands in the area, the Purple trio, comprised of Bewer, Taylor Busby on guitar and Taylor ‘Smitty’ Smith on bass, quickly bonded over a love of The Pixies, Yeah Yeah Yeahs, country, rap, reggae, beer, weed, the beach and a shared sense of adventure. Purple were born.

Live Purple offer a combination of the explosive and the celebratory. Instruments are abused and crowds are surfed; their shows are somewhere between the wild, fleshy abandonment of early White Stripes. “We’re positive people,” shrugs Busby. “We’re always looking for the party somewhere. Or maybe we are the party.”