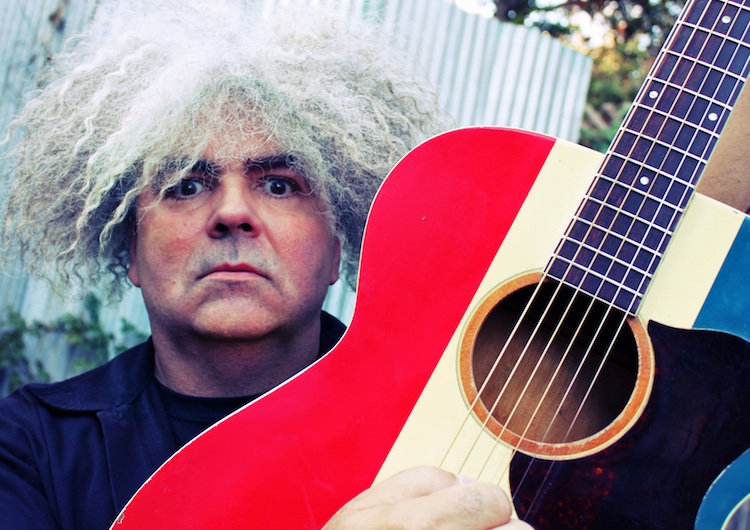 “I have no interest in sounding like a crappy version of James Taylor or a half-assed version of Woody Guthrie,” said Buzz Osborne about the 17-song offering, continuing, “which is what happens when almost every rock and roller straps on an acoustic guitar. No thanks… This Machine Kills Artists is a different kind of animal.”

Rolling Stone gave listeners early access to music from Osborne’s acoustic release, premiering the song “Dark Brown Teeth”: http://www.rollingstone.com/music/news/hear-melvins-king-buzzo-go-acoustic-for-new-10-inch-album-tour-20140214. The magazine remarked ““Dark Brown Teeth” still has the doomy, ill-angled, Beefheartian edge his band is renown for.”
Osborne is currently touring for the first time as a solo artist, wrapping up a three-week trek that included a SXSW interview session with The Stooges’ James Williamson. Remaining dates are: March 20 at Zanzabar in Louisville, March 21 at Radio Radio in Indianapolis, March 22 at Beat Kitchen in Chicago and March 23 at the High Noon Saloon in Madison. An extensive North American tour kicking off in June will be announced shortly. Let’s hope he makes it over to the UK and continental Europe soon too!
This Machine Kills Artists track listing:
Dark Brown Teeth
Rough Democracy
Laid Back Walking
Drunken Baby
Vaulting Over A Microphone
New River
The Vulgar Joke
Everything’s Easy For You
The Ripping Driving
How I Became Offensive
Instrument of God
The Spoiled Brat
Illegal Mona
Good and Hostile
The Blithering Idiot
Useless King of the Punks