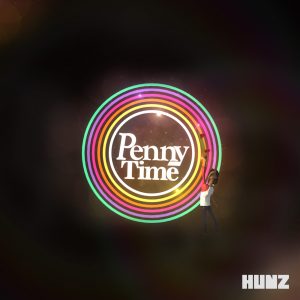 Brisbane-based producer and electronic wizard Hunz (aka Hans Van Vliet) is back with an incredible release that has the music, gaming and online world a-buzz.

The release is ‘Penny Time EP’, a collection of seven tracks originally created for Penny Time, an iPhone skating game that Van Vliet helped make through his own motion design company. Playful and catchy, the ‘Penny Time EP’ sees Hunz trading in his trademark ethereal vocals for an instrumental 8-bit sound.

Taken separately, the soundtrack is an exciting venture into instrumental electronic pop that stands up on its own right. Together with the Penny Time game, it’s an incredible accomplishment of synchronised beats that coordinates perfectly with the movements of the game.

With the Penny Time game making waves in the gaming world, attention has now shifted to the soundtrack, which has been receiving rave reviews in a number of gaming publications with Touch Arcade remarking that Hunz has “crafted a score among the best on the platform”.

To tie in with this, Hunz will be releasing lead single ‘Owl Highway’, a crunchy mix of buoyant beats and synth hooks

The single will be available on a limited edition clear vinyl 7”, split between Hunz and old friends Mr. Maps. Out through boutique label Lofly, the 7” features ‘Owl Highway’ on the Hunz side and ‘Those Boards Don’t Work On Water’ on the Mr. Maps side, a rollicking journey of lush strings, keyboard and intense drumming.

Fans are encouraged to pre-order the 7” from the Lofly store to secure a copy of the release on collectable clear vinyl.

The two bands will also be playing a special one-off show at the Judith Wright Centre on Friday, 20 July.

Side A: ‘Owl Highway’ by Hunz
Side B: ‘Those Boards Don’t Work On Water’ by Mr. Maps