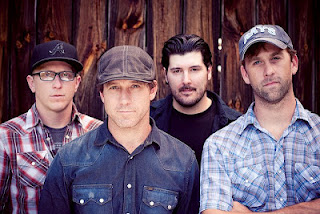 “For us, calling the album ‘EXISTER’, I think it’s a bit of a ‘we’re still here, and we’re not going away anytime soon’ type of statement,” says HOT WATER MUSIC bassist Jason Black, about the name of their forthcoming album due out on Rise Records on May 15, 2012. From the sound of the new music, they’re not just ‘here’… they’ve arrived. Recorded this past January at the Blasting Room in Fort Collins, CO with The Decendents’ Bill Stevenson (Bouncing Souls, Rise Against, NOFX) in the producer’s chair, Exister isn’t the sound of a band greasing their wheels but a band revved up and raring to go. “Recording the album was amazing… better than any of us expected, for sure,” Jason continues. “It seems like the time off, coupled with everything we’ve all learned doing other projects and honing our respective crafts during that time, really worked in our favor and enabled to have a basically unending flow of ideas and creative sparks.” Their first album since The New What Next in 2004, Exister finds the band perhaps a wee bit worldlier but no less fiery. Launching with Chris Wollard’s guitar attack and Chuck Ragan’s trademark gravelly vocals, opening track “Mainline” proves that they haven’t lost their bite. With Chris taking over vocal duties in “Boy, You’re Gonna Hurt Someone”, the propulsive rhythm section of Jason on bass and George Rebelo on drums takes their signature post-punk soar and punctuates it with intricate fretwork far more dexterous than bands ten years their junior. From the soaring “Drag My Body” to the garage-y “Wrong Way” to the anthemic “The Traps”, Exister is the sound of a band whose chemistry is undeniable and in perfect sync with each other. While some bands may be urged to always reply that their current album is their favorite, with Hot Water Music, it seems this is actually the case. When asked which of the tracks are the most special to him, Jason replied, “All of them. Literally. We recorded 13 and all 13 made the record, which is the first time that’s ever happened.” Hot Water Music first formed in 1993 in Gainesville, FL and quickly rose to the top of the post-hardcore punk scene. After releasing seven studio albums, two compilations, one live album and countless numbers of 7″s, EPs and splits, the band took an indefinite hiatus in 2005 but reunited in 2008 and have been playing numerous festivals, quick tour runs, and one-off shows ever since. “I feel like we accomplished more than we’d ever dreamed years ago. So from those points on, it all feels like a blessing,” adds Chuck. “Granted, it is hard work and we do make sacrifices to do what we love, but at the end of the day, if we can hang onto the bond and the reasons that HWM began in the first place and what drove us all those years, then we’ve done our job. If we can continue playing our hearts out, smiling while doing it and continue to grow as friends and as musicians close to 20 years later, then we’ve succeeded beyond all of my hopes and expectations.” Celebrating the release of the record this May, the band is planning a full-scale US tour with dates to be announced in the coming weeks. With announced performances planned for The Bamboozle on May 19th and 20th in Asbury Park, NJ and a headlining record release show at NYC’s Gramercy Theater on May 21st that sold out in one day, Hot Water Music not only live up to the Exister album namesake, but they’re here to stay. Hot Water Music is Chuck Ragan (vocals, guitar), Chris Wollard (vocals, guitar), Jason Black (bass), and George Rebelo (drums). Exister was produced by Bill Stevenson and will be released on May 15, 2012 on Rise Records. EXISTER Track Listing Mainline Boy, You’re Gonna Hurt Someone State of Grace Drown In It Drag My Body Safety Exister Wrong Way Take No Prisoners Pledge Wore Thin No End Left In Sight The Traps Paid In Full

Plants And Animals’ The End Of That Out Today, Band Premieres New Video [News]‏