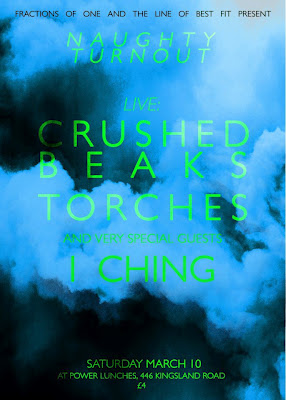 London bands Crushed Beaks and Torches have announced the release of a split download single featuring cover versions of each others songs. Torches’ version of Crushed Beaks’ ‘Close-Ups’ is the first to be released, with Crushed Beaks’ version of Torches’ ‘VTOO’ appearing online very soon.
The bands will celebrate the release of the tracks, with I Ching in tow, on 10th March at Power Lunches Cafe.
Both bands made great strides at the end of 2011 with acclaimed single releases – Crushed Beaks with ‘Close-Ups / Sun Dogs’ and Torches with ‘VTOO’. Now recognised as two of London’s hottest up and coming acts, this new split release goes to further highlight their respective talents.
Appearing online first with their lurching cover of Crushed Beaks’ ‘Close-Ups’, Torches reweld the original’s upbeat urgency into something far more dark, brooding and synonymous with their own sound. Echoed accapellas prove to be the calm before an industrial storm of wrenched guitars, pounding drums and mesmerising drones of synthesisers twist the song’s once upbeat atmosphere into a wonderfully terrifying frenzy.
Already recognised name to the site due to their efforts with our favourites EDILS Recordings. You can download Torches’ free track alongside our very own Aulos’ and good friends Alright The Captain all of which featured on Edils latest free compilation streaming in full below-

Death Grips – Get Got Video [Feature]