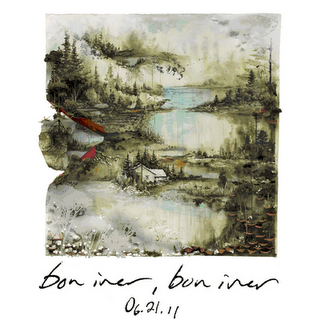 In the past month we’ve not only showed you a preview of the forthcoming S/T album release from Bon Iver, We exclusively revealed the news behind the release and offered you a free single download. All of which featured again in this post alongside some info regarding the new album and a live video of a recent cover.
Almost four years since the stunning and incredibly influential record “For Emma, Forever Ago”, the follow up; it has been announced is a self titled release and will be due out from June 21st via Jagjaguwar.
The Self titled sophomore 10 track album was recorded and mixed over three years at April Base Studios, a former veterinarian’s clinic in Wisconsin that was remodeled by Vernon and his brother Nate, who co-owns the amenities.
Bon Iver will undoubtley feature regulars Sean Carey (whose S Carey efforts can be found in previous posts here), Mike Noyce, and Matt McCaughan.  Volcano Choir members, Jim Schoenecker and Tom Wincek  also contribute to record which it has been reported, feaures pedal steel player extraordinaire Greg Leisz and a horn section provided by Mike Lewis, CJ Camerieri, and Colin Stetson.
Tracklisting (in which each track represents a different geographical location) :
Perth
Minnesota, WI
Holocene
Towers
Michicant
Hinnom, TX
Wash.
Calgary
Lisbon, OH
Beth/Rest
Bon Iver revealed more information regarding the release, Singer Justin Vernon stated the album ” is an extension” of their debut record. The Record due for release June 20th follows on lyrically from where phenomenal masterpiece “For Emma, Forever Ago” left off.
Vernon famously made the group’s 2008 debut in a secluded log cabin in Wisconsin using antiquated recording equipment.

Speaking about the new album, he commented: “Lyrically, it’s an extension of ‘For Emma’ It’s like, what happens when you leave that place? You don’t necessarily arrive somewhere new right away.”

The frontman said he’s already thinking about his next musical project, commenting: “I’ve got ideas for gospel records, for another Volcano Choir  record. I could probably make a punk record at some point – if it comes naturally. I’ve got a tonne of ideas.”

Bon Iver is also set to play a string of UK dates following an Autumn tour of which Circuit Sweet is covering.

Justin recently stopped by the Jimmy Falon show and performed a beautiful cover of Bonnie Raitt’s “I Can’t Make You Love Me” & “Nick of Time.”  The Raitt track isthe b-side of Bon Iver’s “Calgary” single.