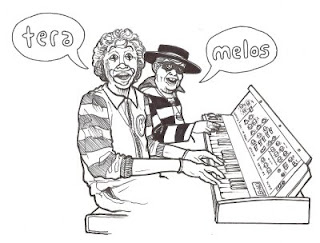 Last year saw Tera Melos return with their radical album Patagonian Rats which can be found streaming below.
Any Melos Enthusiast will be delighted to know that these guys are continuing to work ridiculously hard what with a current tour with Marnie Stern happening, they’ve just announced an EP release.
“Zoo Weather” was initially conceptualized to be released before Patagonian Rats but sadly didn’t happen. However Tera Melos have taken three of the tracks and created a “side d” for the Patagonian Rats double LP. They will be releasing those tracks + three insane remixes (including a melt banana/agata remix!!) as a digital download and a limited pressing of ZW cassettes.
Zoo Weather Tracklist:
Purple and Stripes
Kelley
Manar the Magic
+
Melt Bamanarnana (Melt Banana Remix)
Manar the Magic (Pat Hills’ Rat Trap Mix)
Manar Was a Rat
The prospective release date for this is around February 22nd.
We will feature when released. But hello something more to look forward to…