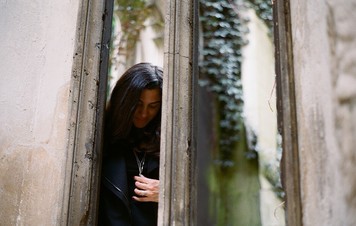 NADINE KHOURI
NEW EP ‘A NEW DAWN’ RELEASED 26 OCTOBER
WATCH A LIVE SESSION PERFORMANCE OF ‘TO SLEEP’ HERE
“The tenderness and longing in her songs are inescapable; we should long for more Khouri” Drowned In Sound  ★★★★★★★
“A thing of dark, possessed beauty… extraordinary voice: a fragile, sensuous instrument”
Mojo ★★★★
Celebrated British-Lebanese songwriter Nadine Khouri has returned with a second single ‘To Sleep’ lifted from her upcoming 3-track EP ‘A New Dawn’, due out October 26th.
Pre-order the EP on limited 10” yellow vinyl. https://roughtrade.com/gb/music/nadine-khouri-a-new-dawn
An early devotee of shoegaze and the dreamy melancholia of bands such as Mazzy Star and Sparklehorse, Khouri began her career as an acoustic singer-songwriter in New York, self-releasing her first EP ‘A Song to the City’.  A mix of folk and atmospheric indie-rock, her material ranged in influence from Leonard Cohen to dream-pop.  Returning to London, she was eventually discovered by legendary producer John Parish (PJ Harvey, This is the Kit) and began writing songs for what would become her first LP, ‘The Salted Air’ released in 2017.  The album earned plaudits from the likes of MOJO and Drowned In Sound, was celebrated by Q (Feb 2017 Critics Choice) and selected as one of Rough Trade’s Albums of the Year 2017.  In the past year, Khouri has toured in the UK and Europe and has shared the stage with artists such as Low, John Parish, Aldous Harding, Howe Gelb, Adrian Crowley, and many more.
Self-produced and recorded in between touring commitments, Khouri’s latest offering is a powerful return from her acclaimed debut.  ‘To Sleep’ sees violinist Basia Bartz doubling Khouri’s nylon string guitar in a pizzicato set against swelling harmonium, piano and flurries of guitar delay.  Penned as “a lullaby she wrote from the point of view of a younger self” in a war zone, Khouri deals with the sounds of shelling by singing herself to sleep: “Teach me / A melody / So I can hum myself to sleep”.
“This song was never intended for release, but it breathed a new life when I played it for Basia and Vince (who play violin and piano.)  More generally, it’s about how art can become a lifeline or alchemical tool for someone in a bad situation… The first line is about my mother teaching me how to draw by candlelight during the war when there was no electricity.  But also being unable to sleep at night and being totally terrorised by the sound of shelling.”
The beautifully arranged track showcases Khouri’s singular, understated vocal, allowing the poignant lyrics to take centre-stage.
After supporting musical giants LOW on their ‘Double Negative’ tour in Europe, Nadine returns to the UK for headline shows.
Live Dates:
16.10.18 – Cafe #9, Sheffield
17.10.18 – The Hug & Pint, Glasgow
18.10.18- Naked Lunch Café, Liverpool
19.10.18 – Hoxton Hall, London
20.10.18 – The Louisiana, Bristol
17.01.19 – Folkroom by Sea, Brighton
Follow Nadine Khouri:
Website