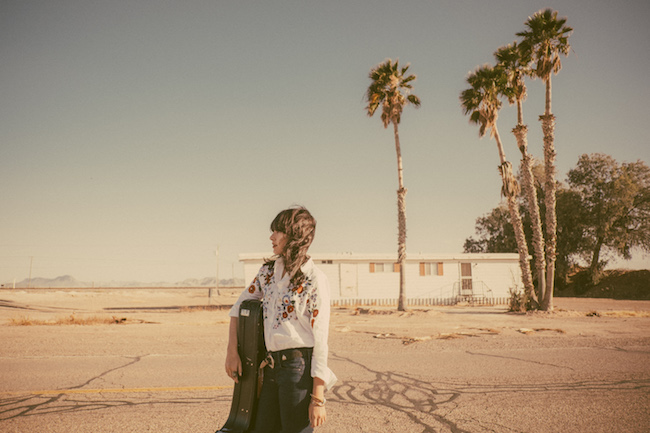 WATCH NEW VIDEO FOR ALBUM TRACK ‘BLACK WINDS’ HERE
Fresh from supporting The Killers on their UK arena tour, Juanita Stein has just played a headline London show on Wednesday 29th November at the Shacklewell Arms.
The Howling Bells frontwoman turned solo artist, who released her ‘America’ album (Nude Records) this summer, has now shared the video for album track ‘Black Winds’.
“He had rough hands
And a cautious glare
No he never smiled,
he was just gracious to be there”

‘Black Winds’ is a track based on a photograph taken by Arthur Rothstein. Juanita says “It sees a man walking head on into a dust storm. Musically the pace and stomp of the rhythm mirror the cautiousness I imagine he is experiencing. Clearly the photograph is a strong metaphor for where this character is at in his life, broken, weathered. I think about his struggle,  I imagine his desire for light and tenderness. “

In this video, directed by Giorgio Testi & Simone Pellegrini, we witness the relationship a man has with a woman, she is a dancer, he is the only man privy to her seduction. There is an unconventional exchange of tenderness, perhaps love, between them.

Juanita adds: “At no point does he make physical contact, she is 100% in control of her physical self and their situation. He is comfortable in his manner and gaze, which suggests this is not the first time they’ve shared this moment together. In the end it is she who leaves him sitting there, grabbing her shawl as she leaves. His final gaze, looking down at the floor, is one of sadness and reflects a deep internal and emotional struggle. He is knowingly walking head on into a storm”.

Juanita Stein has released her debut solo album ‘America’ today on Nude Records.
LISTEN TO ‘AMERICA’ ON SPOTIFY AND APPLE MUSIC
“A fab, dreamy journey into the dark heart of country-noir”  The Sunday Times
“It’s the voice that grabs you… A wonderfully lucid piece of songwriting, emotion lingering on each note”  Clash
“Stein sounds like she’s coming of age on this album, addressing both her past and her future, and mostly liking what she sees” Q
“With an utterly flawless, heart-twisting vocal throughout, ‘America’ spins tales of sorrow and betrayal and turns them into something exquisite” DIY
“Beautifully languid Americana from the singer of Howling Bells, from her romantic, widescreen solo debut” The Times
“A beautifully observed and evocative ode to America… Stein is the powerfully creative master of her art” Loud and Quiet
“A lovingly crafted paean to Americana of all stripes, from Southern Gothic country to swooning Lynchian moods. Stein’s silky voice has long deserved arrangements as sumptuous.”  Uncut
WATCH ‘SOMEONE ELSE’S DIME’ VIDEO                    WATCH ‘DARK HORSE’ VIDEO
www.juanitastein.com