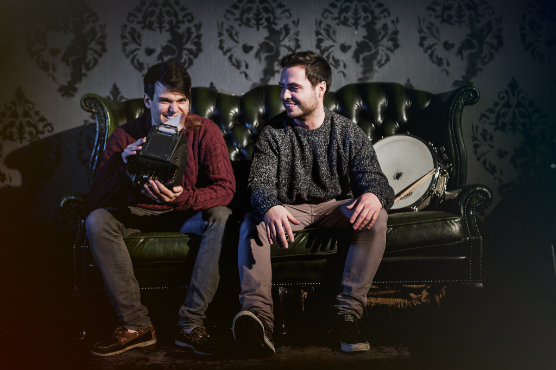 Holy Pinto have just announced their new double A-side single, coming out June 30th on Soft Speak Records. The band’s premiering the first single from the record “King” now via GoldFlakePaint. GoldFlakePaint calls the song… Pre-orders for the single are available now via Soft Speak. Holy Pinto are on the road in the UK this month. A full list of dates can be found below.
GoldFlakePaint says Holy Pinto’s new single is “ripping through its four-minutes in a haze of commuter town angst and thrilling instrumental wig-outs that recall the likes of The Front Bottoms at their unshackled best; chest-thumping earnestness, heart-warming sing-a-long chorus, and all.”

06/15 – Canterbury, UK – Ballroom
06/22 – Southampton, UK – Pre-Bar
06/23 – Dundee, UK – Conroy’s Basement
06/24 – Glasgow, UK – The Old Hairdresser’s
06/25 – Leeds, UK – Santiago BarBiography:
Holy Pinto is the indie-pop band from Canterbury consisting of duo Aymen Saleh and Ryan Hurley.   In late 2013 after leaving University, the long-time school-friends rented a dark, damp, and ominous room in an old abandoned cotton-mill in Manchester, and took to playing music together. After putting some demos online, they released their first official EP “Stenography” in 2015 and started touring heavily behind it; building the foundations of a passionate, loyal following in the process.

They released their debut album “Congratulations” in the spring of 2016 to a wider audience, bolstered by a heavy touring schedule, including long runs in the UK, EU and US. The release garnered the attention of many indie and alternative publications such as the AV Club, Upset and Rocksound. They teamed up with Taco Bell for the Feed the Beat campaign in the autumn, and partook in the legendary ‘The Fest’ in Florida on halloween weekend.

They now turn to release a double a-side single, “King/Very Adult,” via Soft Speak Records on June 30th.  Built on the foundation of Aymen’s bright, shimmery rhythm guitar coupled with Ryan’s uniquely commanding, creative, and dynamic drumming, Holy Pinto are a lyrically focused band that follows the prosaic storytelling style of some of their favourite artists such as Jens Lekman, The Mountain Goats and The Weakerthans. Aymen’s talk-style vocal and English accent draws comparisons to fellow compatriot Frank Turner, more stylistically The Front Bottoms, and the honest, heart on sleeve delivery of Jonathan Richman and the Modern Lovers. Their warm, indie-rock sound, however is more reminiscent of bands such as Death Cab For Cutie, and, the closer to home, Bombay Bicycle Club.

A stylistically dichotomous release, the singles showcase different sounds and intent for the band. “King,” long a staple of their live set, channels anger, denial and confrontation, undoubtedly being their most pure rock song to date. It feels informed by bands like Manchester Orchestra and Say Anything, with its aggressive and unruly guitar playing and chaotic drumming heard throughout.

The more whimsical and poppy “Very Adult” embraces a twee indie-pop vibe, with the restless drumming taking it back to their punk roots. The anxious and restless nature of the narrator’s travails is sugar-coated in a playful delivery, with the overall message being one of hope and defiance; and an encouragement of the listener to take courage in their unique path and choices in life.

The release of “King” + “Very Adult” is to be followed by a handful of shows in the UK and Aymen doing a US solo run in the early summer, before the band settle down to record LP2 in August for release in early 2018!