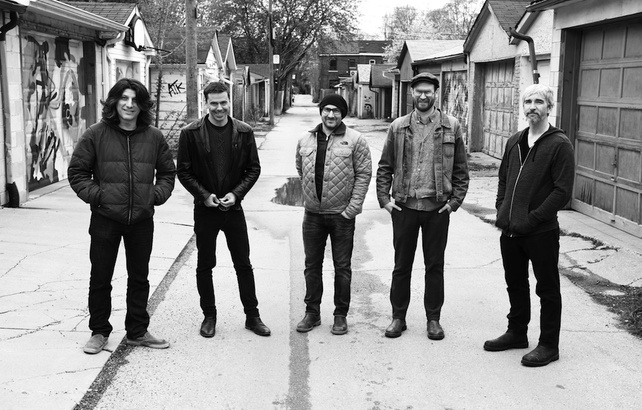 Do Make Say Think have been making cinematic instrumental rock music for over two decades.  Yet the band has intentionally never made a video, preferring to let visuals spool out in the imaginations of listeners.  That didn’t stop band member Charles Spearin from experimenting one night recently, making a video for “d=3.57√h” (aka “As Far As The Eye Can See”) that he simply circulated for fun internally to his bandmates and his friends at Constellation.
In keeping with the same DIY ethic the band brings to their self-produced albums and with the same sparkly, simple ingenuousness that has always shaped their musical aesthetic, please enjoy this new track being shared from the recently released album Stubborn Persistent Illusions and go along for the ride with its accompanying visual.

Spearin wrote this about the video, As Far As The Eye Can See: How do you learn to trust? How do you steer when all you can see is a rear-view mirror? This video is a lighthearted exploration of fear and courage and having your world turned on its head. Based on a poem by Guillaume Apollinaire:

It really is a rarity to find artists this far into their career, and after such a sustained break, sound so fresh and positive. Clearly, rather than lying dormant these individuals kept spinning along with the rest of the world, and their return is a great deal richer for it. As a genre post-rock is certainly stubborn and persistent in the face of rocky times for guitar music, but its value is no illusion if Do Make Say Think’s latest is anything to go by.” – DROWNED IN SOUND [8/10]
“The curtain of nature’s boundlessness is peeled back for ‘Her Eyes on the Horizon’. Like sunlight coming in a thrown-open window, the track juxtaposes a blast beat with a harmonious arrangement that has enough guitar and violin overdubs at the end to constitute an orchestra. And that’s really what this band feels like. They’re a well-insulated arsenal of sound.”
– THE 405 [8/10]
“It’s astonishing that a band could return after eight years of relative inactivity with such a cohesive statement but in this case the band have done just that. Stubborn Persistent Illusions is a fantastic addition to their stellar catalogue and an album that cements Do Make Say Think’s place in the instrumental rock firmament” – THIN AIR
“Musical statements like this, able to carry so much weight yet move so freely, and all without saying a word, are few and far between. The title and loose concept for the album stem from “an image in a Buddhist poem about working with a wild mind,” and Stubborn Persistent Illusions finds Do Make Say Think returning as restless and reaching as they’ve ever been.” – THE LINE OF BEST FIT [9/10]
“After a long time away, Do Make Say Think are still able to captivate as much as ever, and fans will already be salivating at the idea of witnessing this performed live in the near future.” – THE SKINNY [4/5]
“Despite the time spent apart, the band have clearly lost none of their well-honed instrumental harmony and penchant for swooping drama, delivering another album that is best experienced as a whole.” – BOOMKAT
First port of call: http://domakesaythink.com/
more info: cstrecords.com/cst120
order: http://cstrecords.com/store/categories/DO-MAKE-SAY-THINK/Stubborn-Persistent-Illusions
Bandcamp: https://domakesaythink.bandcamp.com/
iTunes https://itunes.apple.com/us/album/stubborn-persistent-illusions/id1207390441?ls=1&app=itunes