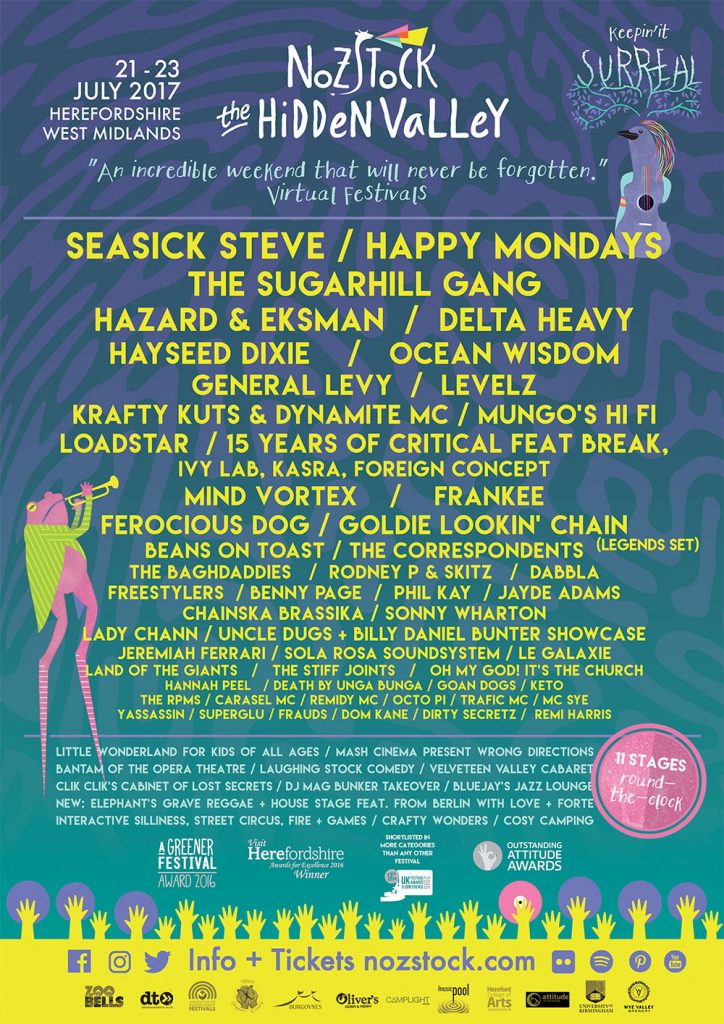 The sublime Nozstock The Hidden Valley festival has just announced its second wave of names, plus a brand new stage, The Elephant’s Grave and the new area Bluejay’s Jazz Lounge.

Curated by the father and daughter duo of Noz and Ella and a huge extended family who work across the entire festival, there’s a unique charm and energy to Nozstock unlike anything else in the country. Reaching its momentous 19th year this summer, Nozstock is an enchanting adventure nestled in gorgeous rolling hills.

The award-winning festival will be looking to best its 2016 achievements: shortlisted more than any other in the UK Festival Awards, winner A Greener Festival Award, winner Best Festival in the Visit Herefordshire Awards (with partner festival Hereford River Carnival), and Outstanding Attitude Award for access efforts.

Curated by the father and daughter duo of Noz and Ella and a huge extended family who work across the entire festival, there’s a unique charm and energy to Nozstock unlike anything else in the country. Reaching its momentous 19th year this summer, Nozstock is an enchanting adventure nestled in gorgeous rolling hills, and is very proud to announce its second wave of artists performing this summer on the beautiful working farm in the heart of Herefordshire.

Widely credited with igniting the hip-hop scene and bringing it into the mainstream in the 1970s, The Sugarhill Gang are an American hip-hop group famed for their iconic 1979 hit Rapper’s Delight. With the first rap single to become a Top 40 hit on the Billboard Hot 100, they remain an irresistible force in music and are set to have Nozstock bouncing in the summer. Next up are Hayseed Dixie, the inspired and hard-rocking exponents of Appalachian Mountain hillbilly rave-ups, who in 2001 released a covers album of AC/DC classics. Fast-forward to the present, and in April they release their 15th studio album, Free Your Mind and Your Grass Will Follow, capturing their idiosyncratic manner. Levelz are a multi-faceted collective of MCs, DJs and producers who have been feted as Wu Tang Clan meets Happy Mondays; their eclectically vibrant sounds segue between grime, dubstep and hip-hop to drum & bass and house and jazz, and they’ve taken a star turn on hip-hop internet TV station Boiler Room, won their regional Red Bull Culture Clash battle, and dropped in on Toddla T’s Radio 1 show.

Next up are Ferocious Dog, a full-on six piece band who encompass wild folk, infused with rock, reggae and Celtic vibrations. Lyrical satirists Goldie Lookin’ Chain remain sharply humorous and controversial, satirically skewering much of today’s consumer society, cultural trends, and railing at life in general. The Baghdaddies’ exuberant and rampant brand of world music is an exhilarating cocktail of Balkan melodies, ska, Latin grooves and sizzling brass played with furious energy, and Le Galaxie have been an unstoppable force since their debut, crafting incredible pop songs. After a 20 year career, The Freestylers have covered a full 360 degrees in the bass music genre, having played all the biggest festivals and most talked about nightclubs around the world, still retaining their keen edge. And heavily inspired by the bass lines of dub music, ragga-jungle and hip hop, Benny Page also works across UK funky house, dubstep and reggae. They are joined by some of the best talent the UK has to offer, including pop-punk group Super Glu whose hooks are stickier than their name, the infectious Millie Manders, psycho-ceilidh rockers Neck, plus The Flamenco Thief, CW Jones, Goan Dogs, Keto, Yassassin, Mica Millar, Humdrum Express, Frauds, Beverley Shrills, Ouroborus, The Discount Orchestra and The RPMs.

Nozstock is also proud to introduce a brand-new stage this summer – Elephant’s Grave, a warm and inviting wooded escape with an overhead canopy, adjacent to one of the festival’s lakes. By day expect the best of reggae, dancehall and rocksteady rhythms from the likes of Drumlove, Go With The Flo, Fat Stash, Kreed, Hold Tight Collective, Dutchie and Gardna amongst others. Then, by night, the new stage takes an altogether different direction, with house and techno on Friday night courtesy of From Berlin With Love featuring Morgino, Blake Parker, Worse 4 Wear, Will Richards, Nautz & Toppa and more. The Saturday night’s Forte party features more rocking 4/4 from Sonny Wharton, Dom Kane, Dirty Secretz, Innerkey, Luke Stanger, Jason Young, Tom Gatley and more.

Just across the lake in The Coppice, is an open-air psychedelic stage inhabited by Bristol’s Tribe of Frog collective, who create a cornucopia of colour and sound with their renowned decoration and some of the finest acts from the Psytrance scene, including the likes of Dirty Saffi, Alta, Psymmetrix, Monk3yLogic, Occular, Subliminal System, Lurk, Nuky and DJ Lorraine.

Over on The Bandstand, summertime and the livin’ will, most certainly, be easy as Sunday afternoon sees the stage swing into a fusion of all things jazz with more bluesy beats to shake a saxophone at with a new offering: Bluejay’s Jazz Lounge is headlined by the exciting young gypsy-jazz guitarist Remi Harris. Only 29, Remi already has a string of awards under his belt, plus endorsements from the best in the industry. Then Sunday morning is all about the upcoming talent with a takeover from BBC Introducing Hereford and Worcester featuring Ellisha Green, Capas, Invincible Youth and Karyo.

Plus, just announced is a host of acts for Velveteen Valley cabaret, welcoming award-winning developer Alistair Aitcheson with his Incredibly Playful Show, prizes mixed with comedic entertainment from Backyard Bingo, plus a melting pot of seductive sass with some of the UK’s best burlesque talent with Jolene Dover, Ursula Dares, Flossie Smalls, Jackie Clementines, Jesticular Dancer, Jewelled Personality and The Glitter Kittens. For those who prefer the highbrow, the first names for The Bantam of The Opera Theatre won’t disappoint with panel discussions on The State of The Arts, talks from the likes of Marika McKennell, the return of the mad scientist Andrew Szydlo, and surreal theatre group Hummadruz, plus a BSL workshop with Abbi Brown.

Set on a beautiful working farm in the heart of Herefordshire, the reassuringly welcoming and independent festival has evolved from 50 friends at the inaugural gathering and flourished into an intimate, musical odyssey. With interactive adventure and performance for all ages, Nozstock is a playground for everyone, from seasoned festival goers to newbies setting out for the first time. The festival features a huge range of entertainment and inspiration for families with games, pop-up performances, and workshops at every turn.