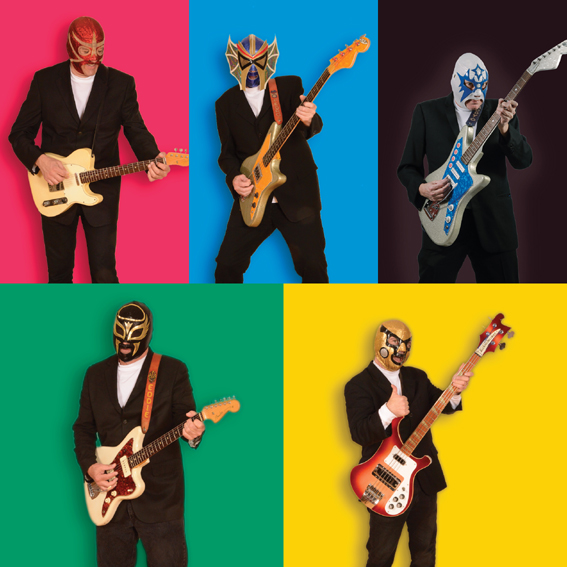 “Instrumental rock demands as much imagination as it does raw chops….”— Boston Globe

“…novelty is a key ingredient, but it’s elevated by the band’s good-natured sincerity and skill.”   –NPR World Café

“…one of the best surf-rock bands in the galaxy…” –PopMatters

Following three holiday tours with Nick Lowe, America’s foremost instrumental guitar combo Los Straitjackets couldn’t help but ask the question, “What would Nick Lowe’s songs sound like as instrumentals?” On May 19, the Grammy-nominated guitar heroes will answer that question with the release of What’s So Funny About Peace, Love And Los Straitjackets on Yep Roc Records.

Produced by Neil Brockbank, Nick Lowe’s producer and longtime collaborator, the band delves into 13 of Lowe’s most iconic songs from his illustrious career with original arrangements. The album also features longstanding Lowe band member Geraint Watkins on keyboards, the recording debut of Royston Lowe on percussion, and a vocal cameo by Lowe himself on an undisclosed track.

“Recording these songs reminded me what a great melodist Nick is,” observes guitarist and co-founder Eddie Angel. “Everybody knows that he writes great lyrics, but he doesn’t always get credit for his amazing melodies. The fact that the songs stand up as instrumentals is proof of that. And I think that we managed to bring something new to the songs, which is what you hope to do when you’re covering other people’s material.”

Known for their audacious album concepts and star-crossed collaborations, when it comes to delivering high-energy rock and roll instrumental music, no one equals the finesse, power and perseverance of Los Straitjackets.

SIDE A
1. Shake And Pop
2. All Men Are Liars
3. Lately I’ve Let Things Slide
4. You Inspire Me
5. Rollers Show
6. (What’s So Funny ‘Bout) Peace, Love and Understanding