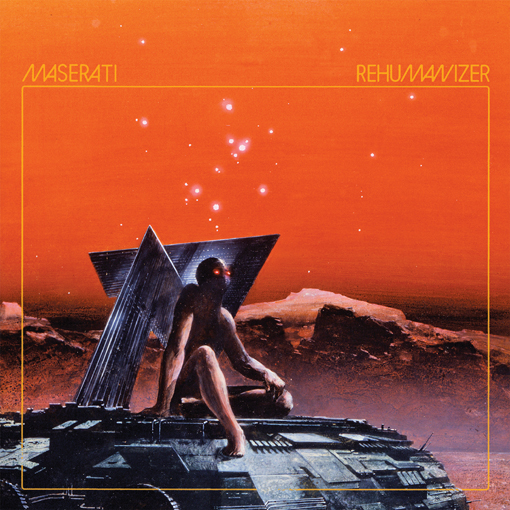 “Everything they do well is on display in these six tracks, which are filled with driving bass, churning guitars, vacuum-sealed rhythm and smartly built crescendos.”  NPR

Maserati are a band obsessed with process.  Specifically, they’re obsessed with the process of marrying the past to the future — retro futurists hellbent on forging Krautrock and classic rock into one motorik, monolithic vehicle. Rehumanizer is the most accomplished product of that process to date, a marriage of man and machine that plays like a supergroup comprised of Gary Numan, Cluster, and Pink Floyd.

You can listen to the album now in it’s entirety on NPR HERE
Recorded, mixed, and produced entirely by the band in their own studio, this is the first Maserati album completely devoid of outside collaboration or interference.  Building songs up bit by bit — and breaking them back down to their barest elements — Maserati fully embraced technology as a songwriting tool. The band takes greater risks than ever, sonically experimenting on the fly and incorporating unprocessed vocals for the first time ever.

For the past decade, Maserati has built a career out of relentless forward momentum – a tight, sleek, chugging beast that drove towards the sun and rarely veered off course. Rehumanizer maintains that same ambition and sense of abandon, but is distinctly as much man as it is machine – a true alliance of the past and the future.

Rehumanizer is released on Temporary Residence on 30th October 2015.

Maserati will be playing a show at London Corsica Studios on 24th November. Which we will be covering.