It’s the final countdown, we are just a few day left until we can all enjoy that needed weekend of mud, music, comedy, galaxies and all things Nozstock. From Friday 24th – Sunday 26th July , Bromyard’s Rowden Paddocks Farm will reopen it’s quintessential grounds after another hard working year of constant organising, planning, booking, promoting and building for their 17th annual Nozstock festival.

Sticking to their rural and local roots, the 3 day festival is set to welcome the right balance of local and national talent, provided by the family run team behind the event they effortlessly unite festival goers from across the country. When you’ve experienced Noz you realise why this is such a cherished event with its own unique amalgamated community.

In our final artist instalment we take a closer look at another talented act playing this years festival and introduce our readers to another outfit in a more personal manor; as we talk to the musicians to find out about their musical endeavours, their live sets and what we can look forward to from them during the weekend. 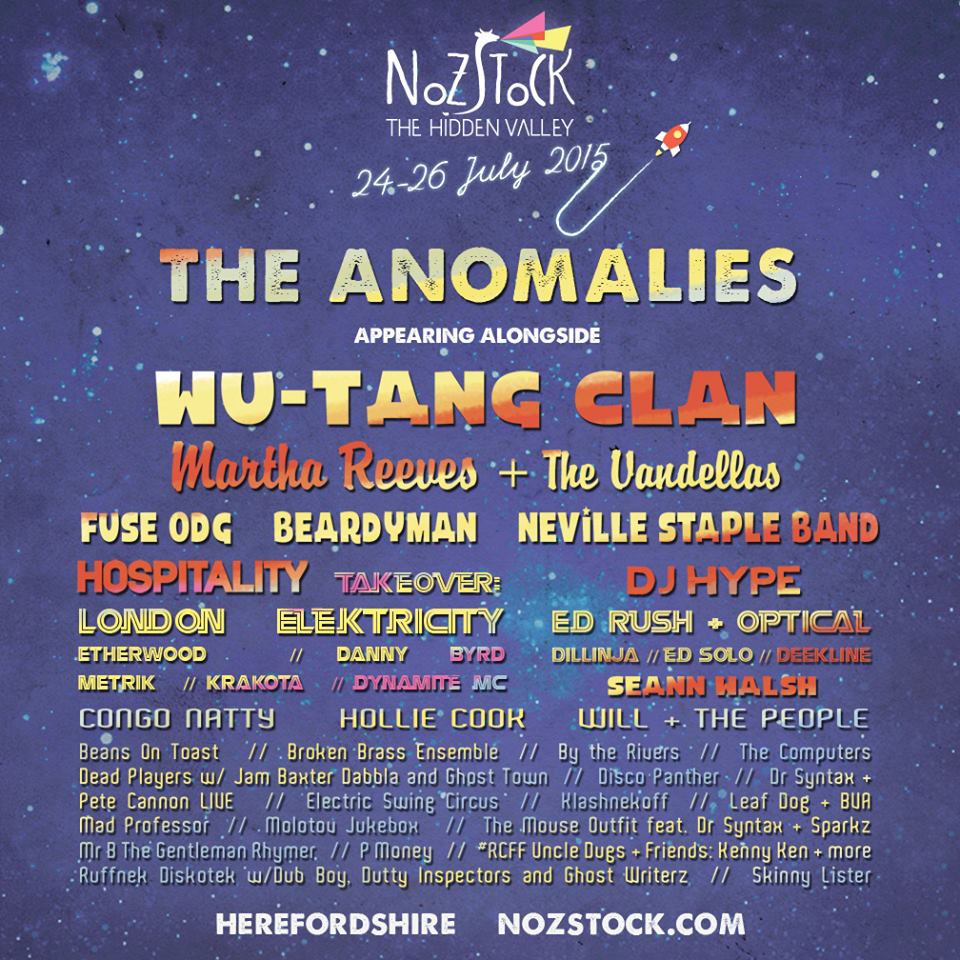 Completing our series of artist features, we had the pleasure in chatting to the talented, local legends The Anomalies. The mash-up hip-hop act are no strangers to Nozstock, actually we can say these guys are taking a must deserved residency of the live stage. They are set to perform on the Garden Stage this Friday at 1.40am and if you think you’re night is done, get back in the crowd and enjoy what The Anomalies have to offer, you will not be disappointed. In one of our most entertaining interviews we spent some time with Murf to find out more about their forthcoming noz experience.

Firstly thank you for spending time with Circuit Sweet. Before we get to the details of your forthcoming live appearance at this years Nozstock Festival 24th- 26th July, We want to get to know more on you. Please introduce yourselves, your role within the band and how long have you been playing and performing live?

I am Murf I rap and produce, and Sam raps sings produces and play guitar, we have long time collaborators DJ Mayhem on the decks and Chrissy Ego on vox and sample, we’ve also got Oli and Josh from the mighty Aulos playing drums and guitar and bass from Chris butts, together we are collectively called The Anomalies.

Myself and Sam both came to music through the back door, we were originally rappers who started to try to make music because we didn’t have any beats to rap so we’d end up creating these odd pieces of music as we had no idea what we were doing, slowly we grew to enjoy producing more then rapping.

We formed in Sams student house, drinking beer and writing raps just sort of mucking about when we started rapping over beats we found everything we did was quite uptempo and unlike the popular British hip hop of the time, so we dubbed ourselves The Anomalies.

We pride ourselves on our live show, when we first started playing out moody very serious hip hop or overly pretentious shoe gaze indie was all the rage we used to turn up for sets and just go ballistic for 45 minutes, it used to help us stand out from all the other bands, not that it did us any good. But when I see a live band I want to see them working hard and enjoying themselves as much as the crowd is. More often then not I’d say we enjoy ourselves more then the crowd.

Sweaty, tired and worse off financially.

Frosty with a air of disappointment.

Loads but sadly we don’t do covers. My favourite Anoms track to play is probably the Skanky one at the moment its got a real good festival vibe to it.

What can we look forward to from your live performance during the festival?

Its going to be high energy and entertaining for anyone that likes to watch men in their early thirtys getting sweaty on stage.

Wu Tang, because its the god damn Wu Ttang, I am contemplating a Lee Nelson Kanye style stage invasion but I am worried I might be killed.

Is this your first Nozstock experience?

No, we’ve been lucky enough to play there 5 or 6 times before its our favourite festival to perform at not only because they are fool hardy enough to keep booking us but it also has a fantastic atmosphere

What else are you looking forward to from this years Noz?

Martha Reeves catching some new acts drinking some beer and trying to survive the drive home.

This years theme is ‘Nozstockers Guide to the Galaxy’- will you be participating with a sci fi look? Or performing a special GttG related track?

DJ Mayhem is dressing in a full movie accurate biker scout outfit, thats not even a joke

How willing they are to book The Anomalies

Give us some festival advice-what one thing would you urge everyone to bring with them for this weekend?

Baby wipes, its a shower on the go

We’re playing boom town festival this year and we’ll be doing a gig in Hereford at some point, we’d love to write some new material but its trying to find the time I really hope we do, I don’t think anyones quite cracked the early 30s rap album yet, and I am dying to hear a trap record about applying for a mortgage or filling out a tax return.

Thank you Murf and Sam and to all in The Anomalies, a pleasure and really  excited to finally catch you all together live this year!

Now you’ve discovered another fantastic act from the incredible line-up get excited fans, it’s this weekend!