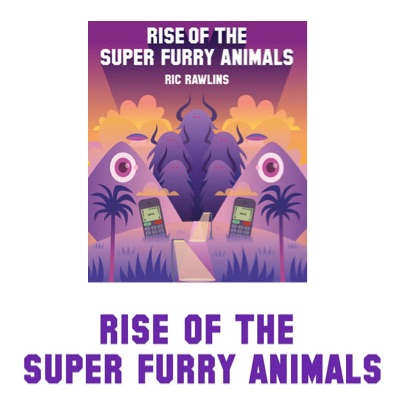 With illustrations by Pete Fowler and full band participation

to mark the 20th anniversary of SFA’s first recordings

‘Revolutionary, crazed and beautiful musical events and conversations that originally happened through the medium of a cracked youthful version of the Welsh language are presented here for the first time in quality English. Ric lifts the lid on these millennial events through comic re-enactments, cosmic speculations and passionate research for the recordings.’

‘Initially I just heard Super Furry Animals as being similar to Blur. So I thought, well fuck! Blur sell lots of records, I could have my version! Little did I know that I was signing the Beach Boys meets fucking Gong meets Isaac Hayes on a fucking acid trip…’

Rise Of The Super Furry Animals tells the story of the greatest psychedelic pop band of our time.

Originally an electronic music collective, Super Furry Animals started out playing raves around Europe before evolving into an experimental rock group in 1993.

Welsh speakers with a lust for global communication, SFA shot to fame on Creation Records and found that, thanks to the record sales of label-mates Oasis, they suddenly had a vast budget to play with.

Wasting no time, they bought an army tank and equipped it with a techno sound-system, caused national security alerts with 60-foot inflatable monsters, went into the Colombian jungle with armed Guerrilla fighters, and drew up plans to convert an aircraft carrier into a nightclub.

Yet SFA’s crazed adventures only tell half the story. By mixing up electronic beats, surf rock, Japanese culture and more, the band recorded some of the most acclaimed albums of the millennium, all the while documenting the mobile phone revolution in their uniquely surreal way.

Written with the band’s participation and housed in a jacket designed by Pete Fowler, the man behind SFA’s most iconic album covers, this is the remarkable story of their ascent to fame.

The Friday Project publisher Scott Pack says: ‘This is an amazing story with an equally amazing cast and some cracking music. Ric has really captured the energy and humour of the band as well as their passion for the Welsh language and culture. Far from being a traditional music biography, this is an anarchic ride through their career and I think fans will love it.’

About the author: Ric Rawlins worked as a music journalist for several years in London, where he produced the ‘world’s first online music festival’ for Artrocker and did live reviews for the Evening Standard. He now lives in Bath with his wife and cat, making videos for the charity Send a Cow. Ric first met SFA in Cardiff while they were making Dark Days/Light Years.

Rise of the Super Furry Animals publishes in paperback on Thursday 19th February 2015, via www.amazon.co.uk and all major book retailers.