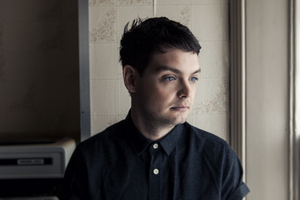 STREAM ‘STRANGERS IN THE NIGHT’:

Sivu has unveiled a beautiful cover of Frank Sinatra’s ‘Strangers In The Night’ – the first song he took to producer Charlie Andrew when they began working together on original material. It forms part of the new EP, ‘Miracle (Human Error)’, out now via Atlantic Records on July 28. With ‘Miracle (Human Error)’ having debuted on Zane Lowe’s show, and picked up plays across Radio 1, 6Music and XFM, Sivu has also been confirmed for this year’s Reading & Leeds, Bestival and Wilderness festivals. He will announce plans for his debut album shortly, whilst a UK tour – featuring a headline date Oslo – has been confirmed for October.

Affecting and anthemic, ‘Miracle (Human Error)’ is a bold step forward from Sivu – marrying his trademark brand of baroque-pop, which has drawn frequent comparisons with Wild Beasts, to the soaring, wide-screen quality of Arcade Fire, and the distorted, aggressive guitars of Radiohead circa-‘Creep’. It’s a dramatic but ultimately uplifting mix, produced alongside long-term collaborator Charlie Andrew (who has recently completed the second Alt-J album, due for release in September). The surreal accompanying video, in which a couple collide as the world appears to collapse around them, was directed by Georgia Hudson (who has recently worked with Klaxons, Swim Deep and MØ).

Whilst growing in confidence and ambition, lyrically ‘Miracle (Human Error)’ retains the intimate, internal conflictions that run throughout Sivu’s work. He started writing solo songs two years ago, upon moving from a sleepy Cambridgeshire town to a claustrophobic apartment on the twentieth floor of a daunting ex-council block in Kennington. Frank Sinatra’s ‘Strangers In The Night’ – premiered today – was the blueprint for a glitchy form of melodically dreamy, idiosyncratic pop, whilst the name Sivu was equally strange but memorable: a translation of his surname in Finnish, it’s a fitting snapshot of the dark and lyrically direct mirror-image that would become James Page’s performing alias. New single ‘Miracle (Human Error)’ was penned shortly after breakthrough moment ‘Better Man Than He’, whose viral video (filmed in an MRI machine) was filmed in between shifts working in a call centre, and picked up over half a million hits – with M.I.A among those declaring it her video of the year. And like ‘Better Man’, ‘Miracle (Human Error)’ sees Sivu’s mind wandering towards bigger topics, often between dead-end sales calls from the office. It’s a vocal fear of The Unknown, asking questions of both the short-term, day-to-day acclimatisation to London life, and the bigger-picture crisis of our place in the cosmos. Not being religious, it’s a theme Sivu was surprised to find himself returning to. “With social media and technology, it sometimes feels like we’re all getting a little colder and are becoming just a bunch of URLs,” he explains, pointing to the oddly-sing-along chorus of “because it’s time to collide / this human error’s what we’re made for / but now we’re dead inside / we’re ones and zeros of a half-lived life”. “I’ve always suffered from quite bad anxiety, and ‘Miracle (Human Error)’ is about that sense of feeling small in the world – and me being as honest as possible, to move forward.”

Sivu has recently completed his debut album, a stunning soundtrack of time spent settling into a new city, young-adulthood, and ultimately his own skin. He will announce plans for it shortly, whilst confirming the following dates for the summer and early autumn: