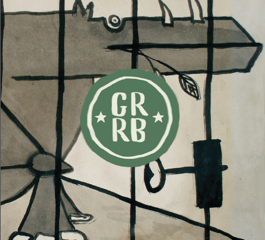 Debut Album Rhinoceros out May 26

Having spent years steaming down the estuary honing an eccentric mix of brash honky tonk string music through a series of EPs, the London octet Green Rock River Band are set to release their debut album Rhinoceros on May 26 through Hand Clap Records.  Recorded live for the majority of its creation, Rhinoceros is the band’s strongest and most adventurous material to date and will be supported by a series of UK shows leading up to its release this summer.

The last couple of years have become increasingly busy for Green Rock, having played for two consecutive years with Megan Lynch, the six-time USA Bluegrass Fiddle Champion and ‘Banjo for Dummies’ author, Bill Evans. The band have gone on to support Emmy winning Memphis country star Bob Cheevers twice on his UK tour, alongside performing in and composing the score for their first feature film, The Fitzroy, a dark British comedy set in an alternate, post-apocalyptic, 1950’s Britain and due for release later in 2014.  Last year also saw the band perform across five stages at Glastonbury Festival, several big theatres including Kingston’s 900 capacity Rose Theatre and become one of the resident bands to play the South Bank Centre through the winter season at the request of the Royal Festival Hall.

For Rhinoceros, the band called in favours from a number of musician friends to collaborate on the record, resulting in Green Rock stretching to new unchartered territories.  ‘Rosie Ann’ – now available as a free download – features a perhaps unexpected collaboration between the band and DJ Walde, which brings a defining first to folk music as rhythmic dubstep percussion lines as ground for the tale of the lovelorn Rosie Ann.  ‘Seasons’, a dark country soul ballad described by one half of the band’s writing team Paul Freeman as, “a pragmatic acknowledgement of time’s unstoppable forward movement,” features Emily Lim on trumpet from the hugely successful Trans Siberian March Band and DJ Yoda Jam band.

Despite these collaborations, the album remains very much in the feel of the Green Rock River Band, with many of the songs reflecting the lives of the members and using the simple poetic restraint of the country songwriting tradition to narrate their own life experiences or spin strange stories from their imagination. ‘Drink Here ‘Till I Die’ is an infectious bandstand belter that delivers anthems for the working man.  However this is not a penniless drunkard rambling but rather an intelligent Dropkick Murphys-esque stomper. It details the tiresome tedium that comes when there is no end to work, and, as the other half of the song writing team Jeremy Sachs explains, the only solution lies “with a few mates in the pub or a 4 pack of beer for the bus home.”

Jeremy continues, “the goal has never been to create a carbon copy of folk music or folk tradition that has gone before.  These songs mean the world to us, and mean a lot to the listeners too. We couldn’t create songs like these by sticking with the same formula that has come before, we needed to find a new way of doing things. A new approach that got people excited and thinking about alternative ways of looking at folk, but also respectful of old musical traditions”.