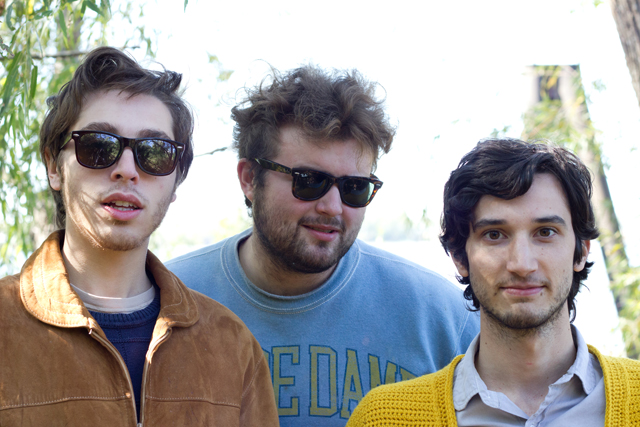 Native America began as an experimental recording project for 22-year-old songwriter Ross Farbe as a way to channel his love for tiny keyboards, homemade noisemakers and bedroom recordings into addictive tunes with an ethereal dream-pop influence. An infatuation with physical space and natural reverb lead Farbe to break into warehouses, campus parking garages, and abandoned spaces around New Orleans, risking his spotless criminal record to lay down a few tracks.

These early collections of patchwork songs paved the way for the band’s growth from one to three, with the addition of John St. Cyr on bass and Ray Micarelli on drums. This dynamic trio has attempted to tame and document this mismatched monster with their first full-length effort “Get Well Soon”.

“Get Well Soon” has been in the oven for quite a while. In the two years since releasing “Dancing About Architecture”, the group has spent a multitude of hours writing, experimenting, and recording the sounds that would become this new record. Native America’s first full-length features the band at their most jubilant, with bouncing rhythms and classic progressions interspersed with haunting drones and walls of noise.

Now that the time has come to put the final product out into the world, the band has turned to its biggest supporters to help realize this goal. Acting independently of record labels and publicists, the band is seeking to fund the release of this full-length album with a fan-supported kickstarter campaign, with rewards ranging from physical copies of the album and personalized cassette tapes, to the band recording a new EP dedicated to a supporter’s pets.

Native America is also supporting this release with a 15-day jaunt across the southeast including dates in Texas, Tennessee and Florida. Native America’s release tour will culminate in a muti-band record release show in New Orleans on January 18th featuring Zorch, Ava Luna, Celestial Shore, All People and more.

Joel and Ethan Coen and T Bone Burnett to present ANOTHER DAY, ANOTHER TIME: CELEBRATING THE MUSIC OF “INSIDE LLEWYN DAVIS” (New York City, September 29th)‏