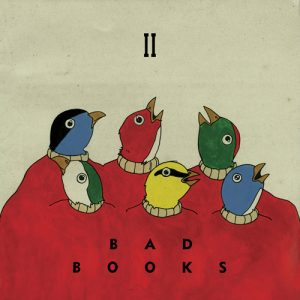 Bad Books, the collaboration between Kevin Devine and Manchester Orchestra, will release their sophomore album II on October 9 via Triple Crown Records and Favorite Gentleman. Today, physical pre-orders for the record launched in conjunction with the debut of their latest single “It Never Stops” – which you can listen to on Absolutepunk.net. This October the band will hit the road for tour dates across the US, with stops in Seattle, Los Angeles, and a performance at Austin City Limits. See full dates and information below.

II was recorded at Favorite Gentlemen Studios in Atlanta, GA and was produced by Devine, Manchester Orchestra’s lead singer Andy Hull, and Bad Books/Manchester Orchestra guitarist Robert McDowell. Rob Schnapf (well known for his work on Elliott Smith’s seminal recordings XO and Either/Or) leant his talent to mixing the album. II expands upon the band’s well-received self-titled debut, which won praise for the unique “union of opposites” in Hull and Devine’s songwriting explored on NPR’s All Things Considered. Alternative Press praised the dynamic as well, writing “the thing both Hull and Devine are famous for is the ability to write great songs,” going on to say that “when the two styles meet, it’s especially rewarding.”

You can now pre-order the new Bad Books album II on MerchDirect.

THE CARDIGANS – Re-Issue Remastered Back Catalogue on Vinyl LP, Feb 2019