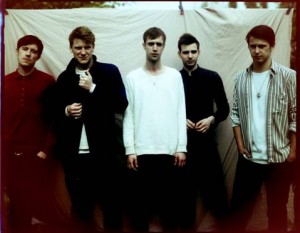 London 5-piece Born Blonde will release a brand new single ‘I Just Wanna Be’ on July 16th via Moriarty The Cat Records.

Following the critically acclaimed ‘Solar’ and ‘Radio Bliss’ singles last year, ‘I Just Wanna Be’ is an absorbing space-rock anthem, where shimmering soundscapes meet disorientating histrionics. A blissful taste of what’s to come from their debut album set for release later this year.

Lyrically, the track is one of the most introspective for singer Arthur Delaney, who says: “The best songs are written in a sort of meditation, like you’re running on a different neurone path in your head somewhere between speaking and dreaming. I was in those channels for this one.”

To use the word ‘epic’ would be both a cliché, and an understatement. There isn’t a screen silver enough for the shimmering Born Blonde sound. Theirs is a soundscape of spectral beauty and crystaline structures, and one that answers the question of what would happen if the shoegazers had looked up once in a while and remembered what it was like to enjoy themselves.

With clear vision and endless creativity, Born Blonde have confidently forged their own identity and have developed an immersive live show which is as captivating as their recorded material.

See them play live at the following shows in  July:

‘I Just Wanna Be’ will be available on July 16th as a digital download via iTunes, Bandcamp and also on CD with new b-side track ‘Dreamland’, a Desert Mix and Extended version.

Sight In Sound and Thrust Management Present: In Other Words and Sleep City On Tour 7/27-8/5