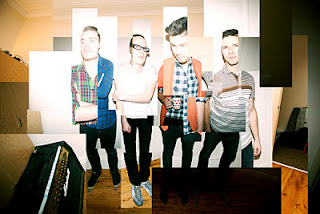 Regularly praised and loved band on the site The Cast Of Cheers alongside Theme Park have just announced a co-headline tour.
Two of the UK’s fastest rising young band’s are set to head out on tour together this spring.
Beginning at the Glasgow Art School on Feb 27th and finishing up in Kingston’s New Slang, these are set to be exciting live shows highligting the talent and abilities both bands posses. New fans will be made- Must See.
February
March
The Cast of Cheers self-recorded album “Chariot” notched up over 150,000 downloads on BandCamp and netted them a nomination at the Choice Music Awards in their native Ireland. Their imminent debut single “Family” has already been causing a ruckus on national radio, with support from the likes of Zane Lowe, Fearne Cotton, Huw Stephens, John Kennedy, Radcliffe and Maconie ahead of its release on February 20.
Theme Park who were voted second in the “Blog Sound of 2012” Poll have released two singles to date (also receiving strong radio support from the likes of Huw Stephens, Nick Grimshaw, Zane Lowe, John Kennedy, Lauren Laverne, etc) and toured the UK with the likes of Bombay Bicycle Club, Summer Camp and Antlers. The band are also set to support Florence and The Machine at Alexandra Palace in March.
Their next single is due in March on Transgressive Records.
Tickets for all dates go on sale today.
Links:
http://www.thecastofcheers.com/
Theme Park