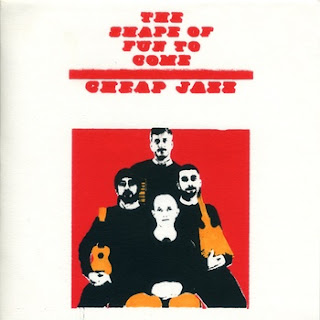 Cheap Jazz consist of Chris Marsh- Vocals/ Guitars, Jamie Cattermole -Drums, Dan Wheeler- Guitar/Vocals and Pobtej Roobish on Bass. Formerly known as “FUNfun”, made up of two former members of Younogodie and two former members of Plans and Apologies. The band have previously released Sorry If I Was A Bit Rough Demos, The Hitchcock EP and Cheap Jazz: Demos.
Now a very familiar name on our site, Cheap Jazz have had an incredible year leading up to this week- their album release. After featuring their European Tour Diaries with Alright The Captain at the end of October/beginning of November; the album release heightens the momentous few months this band has achieved.
First discovered back in August, Cheap Jazz truly captivated their audience during an incredible live night with Alright The Captain, Aulos and Our Helical Mind also fitting the bill. Their fast paced enigmatic set impressed so much- genuine fans were made.
Live; they offer an experience you’ve been longing to witness. A tight engaging fun melodic set. Each member powers from one another which is captured within their creativity. The four are renowned for providing a set with “Twisty Turny Riffs and other devilry”, and that they do but their live performance holds so much more. Their creativity which we found throughout their live performance has been accumulated in their new album The Shape Of Fun To Come . 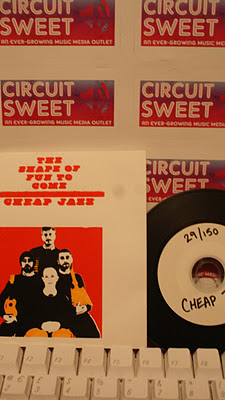 11 Tracks of melodic and raucous rhythms. Blending a structured balance of math rock, fun rock and post rock. As previously stated- this band are without a doubt refreshing. A fun and engaging band basking in their abilities to explore experimental territories and create a long lasting, powerful and unique record.

Although released at the tale end of 2011- be sure to find this release in our Rad Releases feature next week.
Tracklisting
1. School (is a gateway drug)
2. John Belululululushi
3. T.T.
4. Tiff
5. Rope
6. Dawntreader
7. The Trouble With Harry
8. Unfun
9. 8, 6, 4, Desmond
10. Butter In The Marmite
11. Pap Smear
Streaming in full below, get your copy from bandcamp for just £3 and support such talent.
All songs handwritten in a Bakery in Derby by Cheap Jazz
All songs were recorded between Spring and Autumn 2011 at Dubrek Studios, Snug Recording co, The House of Fun and Shepherd Towers, all in Derby.
The album cover is a nod to the great Ornette Coleman,who released the album “the shape of jazz to come” in 1959.We had many reasons for wanting to do this cover art, Another band we love are Clinic who also used a likeness of the album “Ornette!” for thier own album “Internal Wrangler”. Another reason is CABLE “our all time influential derby band” did a pastiche of John Mayall’s Blues Breakers album for thier first album cover.
And of course we all loved Refused’s “The Shape Of Punk To Come”
Thanks To (in no particular order) Alfred Hitchcock, The King Jdog, Jake Green, Justin Dean@Dubrek, Robbie@snug, Marty “Buttonpusher” Toner, Papa Fresh, Dange, Glyn Allen, Glenn Pictographic, Tracey Meek, Mr Mansfield, Pete & Holly from Hatch’d, Fee, Tom Robinson, Phil Formby, Lara Elliot, Alright The Captain, A-tota-So, Papayer, Grande Duke, My Psych,Sofa King, John Makay, Aulos, seas of mirth,Creative Boom, Circuit Sweet, ICHAP, And To All Our Friends And Family, Thank You So Much.

The Bulletproof Tiger- You Wanna Kiss About It? [Album Stream]