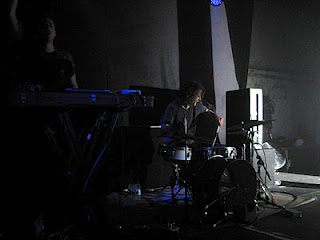 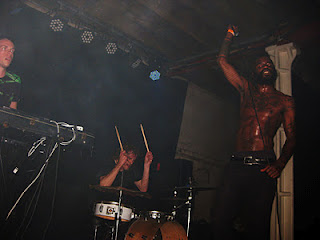 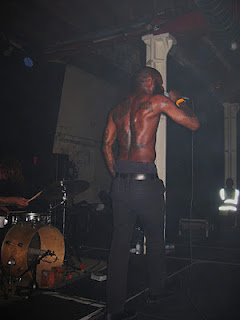 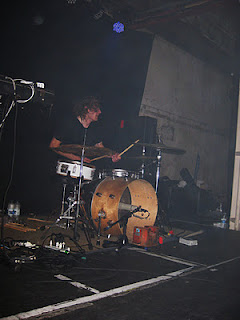 Unnamed figures, an iconic drummer, mystery and a free mixtape download which took hold of the internet only a few months back- led circuit sweet to travel hundreds of miles for a stay in London to catch what is honestly the most powerful and forceful act around to date- Death Grips.
Words fail to describe just how important and how incredible this performance really was. Death Grips took to their set promptly after the opening act, taking to the stage in the darkness. Their deep sound emitting throughout the venue, the crowd all in awe, captivated by the depth but all in need of that first view of Death Grips. Courageously yet aggressively MC Ride stormed his way back and forth to each end of the stage; actively progressing/screaming through his lyrics in a compelling and violent manner. Never once stopping or loosing his place by connecting with the crowd who were so desperate for the figure to acknowledge them. The front man’s demeanour so unlike the norm, standing out above any front man’s actions seen previously. Intelligibly dictating  the stage and the crowd interaction. This Stern representation accompanied with annihilating and relentless powerhouse drumming from the notorious Zach Hill, alongside the intense moody synth work of mastermind producer Flatlander culminated into the most powerful and meaningful set to have witnessed and felt a part of.
Circuit Sweet Media caught Death Grips Live @ XOYO Sunday 25th September 2011. More videos to Follow.