Parachute for Gordo consists of Laura Lee – guitar, John Harvey – bass and Mark Glaister – drums. The three are easily an unmissable and dynamic band, this is THE band to watch for 2020. Their sound is vast, huge on a monumental scale, you’ll be surprised their engaging orchestrations are the sound from a band of 3.

Best Understood by Children and Animals is the fourth album from the underground veterans, recorded by producer Mark Roberts (Delta Sleep, The Physics House Band) at Brighton Electric. After having self-produced their previous albums on a shoestring budget, Best Understood By Children and Animals is Gordo’s first foray into a professional studio environment. This new approach has allowed the band to develop their sound in every direction to make something more expansive, intense and intricate than ever before.

A Dingo Ate My Discos

White Noise Bear (I Am The Horse)

Toucan Play At That Game

Snakes For The Blind

The 7 track album in its entirety is such an immense and crushing journey. The bold collection showcases Parachute For Gordo‘s creative work of outstanding musical artistry- you’ll gravitate to this band the second you hear a single note played, truly engaging. Best Understood By Children And Animals keeps the listener hooked with its dynamic delivery.

The first single from the record, as we’ve previously praised, ‘Dalai Llama’ is equally intense as it is uplifting. The perfect introduction to this vital album. The track completely attacks your senses, a blistering and boisterous instrumental composition which multiples into a fury of explosive crescendo resulting in an intoxicating climax.

As the singles flow, Markhor Parkour embraces the agility of each instrument and channels the brash bass notes playing off the guitar and crashing cymbals. As the notes get more in line, and the guitar gives off more scratchy sounds, the track rapidly speeds up to the most hypnotic soundscape and rhythms and one of the most mesmerizing riffs, the end of this track could easily be on a soundtrack.

White Noise Bear (I Am The Horse) is the midway point for the record, angular, sonically monumental and punk attributes through and through. The short yet intensely satisfying composition awakens the journey of the release, filled with screamo lyrics and attentive aggression. Toucan Play At The Game gives off more of a math rock vibe from the band as the show how effortlessly they can flitter between such a variety of genres and yet make something so utterly unique.

The record ends on the alluring sounds of Alpaccino, the more earnest the effort the bigger and bolder the effect- a heightened track to end on with the colossal cinematic rock tendencies.

In all- striking elements are present within every track, abrasive noise and raw sounds and all-round clever instrumentation from this trio. Parachute For Gordo curate such a vivacious and vast soundscape- this album is a must-hear. 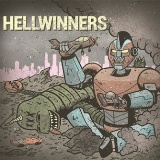