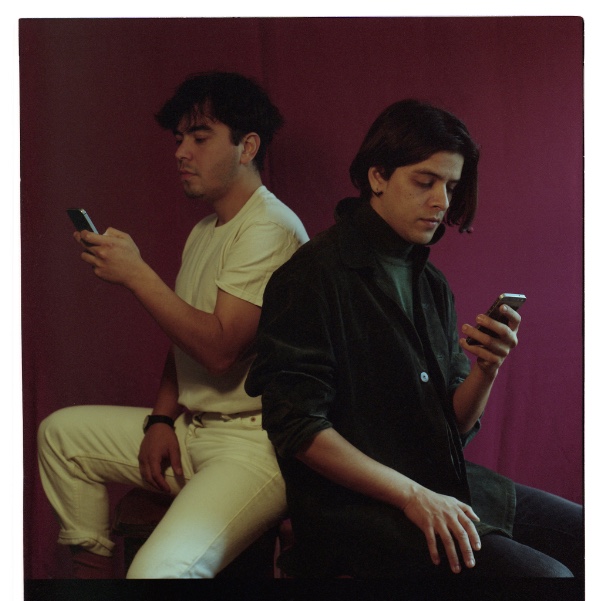 “…Ives Sepúlveda and Manuel Parra revamp the group’s sound, evolving from their more slow-paced 2015 album, ‘Moonlust’, to a more engaging and resonant tempo.” – NPR
“Melding fuzzy stoner wooze with krautrock drive, they take a leaf from The Flaming Lips’ book and lead us on an enjoyably sophisticated excursion to the far reaches of the pop continuum.” – Electronic Sound
“They manage to retain and evoke so much humanity—and perhaps that’s this record’s greatest strength.” – Paste
“…it finds The Holydrug Couple at ease, working on fresh ideas, looking towards new challenges.” – CLASH

With their European tour drawing to a close, Chilean psych duo The Holydrug Couple share a new video for their single “I’ll Only Say This”, taken from their album ‘Hyper Super Mega’ which is out now on Sacred Bones.

Directed by Flavia Contreras and Isabel Florencia Baeza, and produced by Joaquin Echeverria and Pascual Mena, the video for the blissed-out psychedelic space rock track embraces hedonism and disorientation. The directors say that it “explores two paths. First, it is a collective and intuitive research about the identity of the band The Holydrug Couple and all it is to be in a band based in Chile, exploring a reformed imagery from the preconceived ideas of Latin America. Second, it wanders into the film world, on the evidence of the mechanisms and limits of cinematographic representation. Both directions come together to reveal the spirit of the new album ‘Hyper Super Mega’ and the idea if we carefully pay attention, we will see what at first was hidden.”

Amidst eleven tracks of perfectly-formed, heady psych-pop, ‘Hyper Super Mega’ speaks of immediacy, internet and social media, consumption, love and a comfortable despair at the state of the planet. It tells of a world over-connected through cell phones and information, whilst hinting at the place of occult language and imagery in an attempt to convene different and unknown places, or places that are open to interpretation.

Following the release and surrounding tours of their second album, 2015’s ‘Moonlust’ (Sacred Bones), Ives Sepúlveda Minho and Manuel Parra found themselves back at home in Santiago, Chile, feeling directionless and listless. Amidst these feelings of post-tour weariness, the words “Hyper”, “Super” and “Mega” struck a chord – terms with origins so steeped in history and mythology, which have come to represent stark superlatives of consumerism. Hypercapitalism, hypermarket, hyperspace, hyperactive, hyperlink, megabyte, megabuck, megalomania, megastorm, megaplex, superhighway, superhero, supermodel, supersize… “It seemed that the scale of everything over-exaggerates human capacity and time” Ives notes. So, the duo immersed themselves in these feelings and started to build the foundations of their new record.

Overall, ‘Hyper Super Mega’ is a capsule history of The Holydrug Couple, incorporating a decade of experience recording, touring the world, and absorbing the sights and sounds of their native Chile.