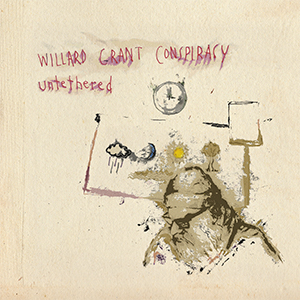 “Untethered” is the final album from Willard Grant Conspiracy. The album consists of the last recordings made by Robert Fisher and his ever-evolving band before his untimely death on February 12th 2017. The tapes were shelved after Robert died and have only recently been dusted down and brought to life with the care and attention of his longtime compadre David Michael Curry. As he explains “there was a growing sense of needing this record to honour the history of the band somehow”. Contributors include Steve Wynn and Chris Brokaw but it’s David Michael Curry alongside Robert Fisher who hold the whole project together.

The title track ‘Untethered’ was written following Robert Fisher’s diagnosis, as David Michael Curry relates: “Incubate Festival in Tilburg, Netherlands was our last show in 2016. When we returned home, Robert went for a check-up because he said he felt something unusual. He was diagnosed within a month or two of that final tour. He wrote the song “Untethered” shortly after that.”

Willard Grant Conspiracy’s final album, “Untethered” will be released on 7th December 2018 via Loose, available on CD, vinyl or digitally.