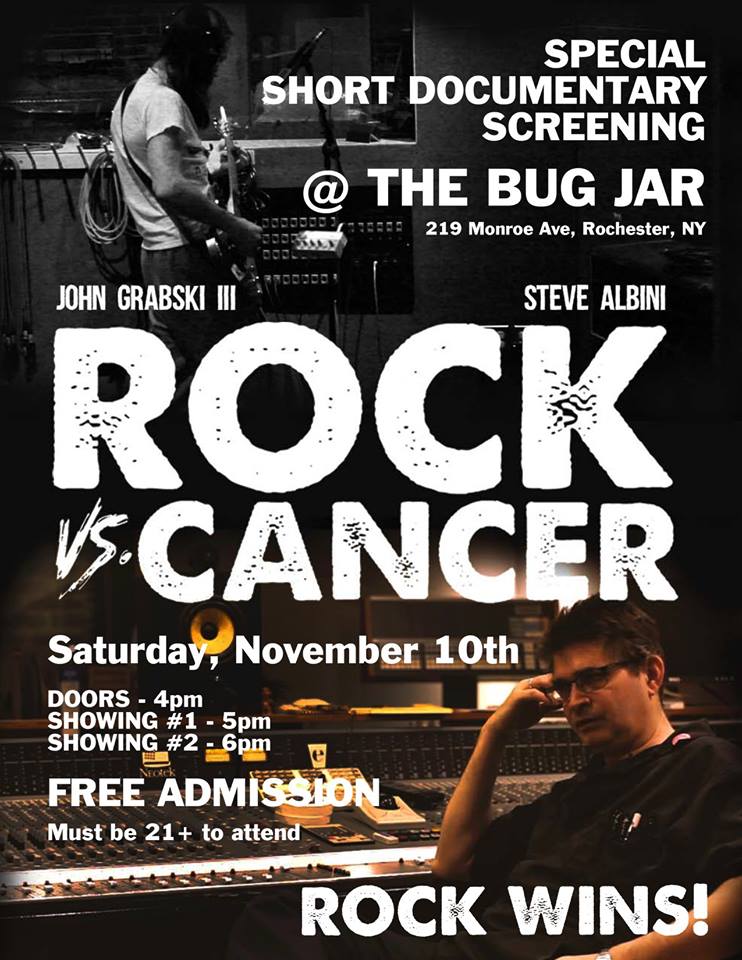 Former Canandaigua, NY resident’s intense last days are captured in this short film that covers his battle with cancer and his fight to fulfill his goal of recording an album with legendary music producer, Steve Albini.

On Saturday, November 10, Rochester’s beloved Bug Jar is set to host two back-to-back screenings of ROCK VS. CANCER, a short documentary that takes an in-depth look at Rochester’s own John Grabski III (of Teeth & Cheebahawk), during his final days as he made his way to Chicago to record with record producer Steve Albini. Through insurmountable odds, John left behind a hate letter to cancer and a love letter to life, assembled within the construct of a 30-minute rock and roll LP. Rock critic Everett True describes John’s album “The Strain” as, in essence, “One of the finest of its genre in a decade.“

Record producer and audio engineer for bands such as Nirvana and the Pixies, Steve Albini recognized the larger power of “The Strain’s” message, stating,

“When I think about the scores of people who are diagnosed with cancer every day, I can only imagine how disorienting, how alienating that must be. And just as each cancer case is different, inevitably the images of cancer patients in the media and public consciousness will fail to resonate with some of them. Not everybody can be Lance Armstrong. Trying to imagine a kid with cancer feeling alone and distant, I can also imagine that kid coming across the Strain, and seeing an example of how a cancer patient can confront the disease head-on, and unflinchingly stare it down. I think John Grabski, Teeth and the Strain could be like the Ramones of cancer. John’s music could inspire a cancer patient to continue his life rather than put it on hold. To take a shot at fulfilling an ambition, to carry on eating with gusto, laughing, making plans and engaging 100 percent with the world around him.”

Back in January of 2012 we first introduced our readers to this incredible human being, a memorable musician and a man dedicating his life to his music no matter the horrible health situation that looked John in the eye, John remained touching others with his musical outlet- and we so admired that. Despite only being in contact for a short 4 months, we were honoured to have introduced ourselves to John and share his story here in the UK online, and via some West Midland newspapers. If we could get out to Rochester to see this film, we would. In our 3000 mile absence, we urge you to absorb everything in the forthcoming screening.

Cancer may have claimed John’s body but it never claimed the character, dignity, or music behind the man. Attend the screening to relive John’s last days and prove that when it’s rock vs. cancer, ROCK WINS!

Jacob Kindberg is a Nashville-based director, writer, producer, and editor. Jacob is a member of the Motion Picture Editors Guild and has worked on feature films, national commercials, music videos, and branded shorts. His feature editing credits include the HBO documentary Tapia, Marvel Animation’s Iron Man and Hulk: Heroes United, and the AT&T original documentary Give Us This Day.

ROCK VS. CANCER will release to the public online on Giving Tuesday, November 27. At this time, family and the director ask that you consider contributing to Sands Cancer Center, where John was treated, or Stupid Cancer, nonprofit organization leading in young adult cancer advocacy, research, and support. Donation pages will be included in the release.

Open as a bar and venue since 1991, Bug Jar is a Rochester favorite. Featuring indie bands and local artists, John performed at Bug Jar for both Teeth and Cheebahawk.