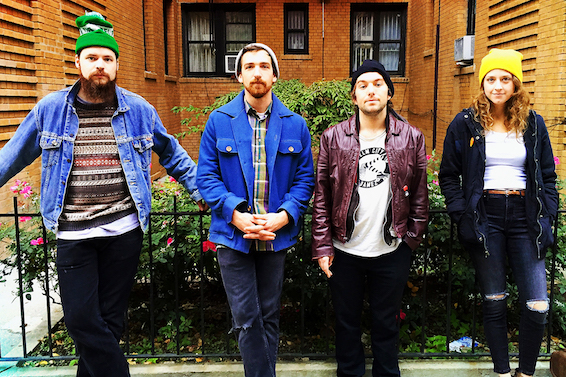 “VERB FOR DREAMING” OUT NOVEMBER 16TH VIA EXPLODING IN SOUND RECORDS

UPCOMING SHOW WITH PRIESTS AND EMPATH IN MAINE

New Hampshire’s Rick Rude will release their sophomore album, Verb For Dreaming, this Friday, November 16th on vinyl and cassette (as part of the EIS Tape Club). The quartet’s latest is an impressive batch of songs built on friendship and a knack for fuzzy punk brilliance. Comprised of three songwriters, each bringing their own voice and style to the mix, Rick Rude blend together in perfect harmony and cohesion. “Doughnation,” the album’s second single is led by Ben Troy (vocals/guitar), a song about finding happiness in helping others to find happiness. The Alternative premiered the song, saying:

“It begins with a thumping drum line quickly takes off into a post-punk pounder once the blaring guitars come cranking in. The track’s set to carry on for another minute at high velocity until it suddenly jolts to a quarter of its pace, each string instrument needling between each other until they all dissolve into shrieking distortion.”

“‘Doughnation’ is a song about intentionally being happy. Life can be a constant and perpetual struggle and it is our duty as human beings to set aside time and intellect to seek happiness, or in some cases, create it. The song also suggests that one method for forcing happiness upon oneself can be done by helping others achieve that happiness. Alan Watts’ “The Meaning of Happiness” was a big inspiration in the writing, Bunny’s a Swine was a big inspiration in the sound.” BIO:Verb For Dreaming, the sophomore album from New Hampshire’s Rick Rude is an album that exists upon eternal friendship and the feelings of personal weight shared amongst a collective. It’s an album that could only exist with each of the band’s three songwriters sharing their own unique perspectives on love, inspiration, efficiency, confusion, comfort, and growing a serious mane of hair. With a focus on harmonies and togetherness, their voices blend together to explore deep thoughts, contemplative moments, and light hearts. It’s abundantly clear they’re having a great time in doing so.

Informed by their upbringing as “people of the woods, small towns and tight communities,” the members of Rick Rude say their music is “driven by the connections and experiences within these close-knit settings.” That earnest nature and sense of familial purpose can be felt throughout Verb For Dreaming, shining bright on “Dough Nation,” a shout-along anthem about finding happiness in the pursuit of helping others find happiness, and “Surrounds,” a tale of love and loss, starting over and surrounding yourself with those you care about most. They set mode and tone better than most, jittering between serene slow-dripped beauty (“Dolly Hook”), volcanic “college rock” (“Verb For Dreaming”), and dismantled art-pop with a post-punk intelligence (“Jupiter”).

To let the band tell it, Rick Rude is “a four-membered creature whose tattered robe, four-string guitar, and sand-filled shoes are surrounded by a haze of sweet smoke and empty beer cans, thrashes about with a charismatic enthusiasm matched only by its lethargic demeanor, speaking fluently in the cryptic languages of dreams, love, and ennui. It inhabits a dark cave on the mountainside of truth, carefully furnished with dismantled electronics, books on meditation, and warped records of Guided By Voices, Built to Spill, and Cheap Trick. A nocturnal creature, Rick Rude feasts on mystical fungi, boredom, mushy guitar riffs, and the delicacy of the human soul.”

The band are creating this music for themselves as much as anyone else, a common release and change to spend a few good hours together with pals, doing something creative in an encouraging environment. Rick Rude play an enormous part in the Seacoast DIY community, and with Verb For Dreaming that community is expanding, a light shinning from deep within the woods is bound to be seen beyond the trees.